Paratroopers Training School Agra : All You Need To Know 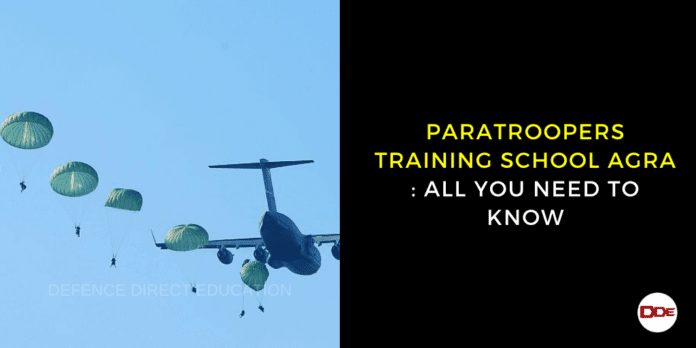 Paratroopers Training School Agra : All You Need To Know

Paratroopers Training School Agra is a premier training Institute of Indian Army. The School comes under the aegis of Indian Air Force. The paratroopers of Parachute Regiment Special Forces, paramilitary forces and other forces are trained at Paratroopers Training School in Parachute jumps. The school is located at Agra in Uttar Pradesh. The PTS Agra is the part of Central Air Command Indian Air Force.

The School was established under 50th Para brigade in 1941 at New Delhi. After the Independence, the school was permanently shifted to Agra. Earlier the Dakota, Hudson and Halifax Aircraft were used for Paratroopers Training.

The School has participated in many operations of Indian Armed Forces. The PTS supported the forces in Indo-pak wars of 1965 and 1971. The school had also participated in Operation Pawan and Operation Cactus (Maldives). The school was presented with the president Colors by then President Shankar Dayal Sharma in 1994.

Some of the Airborne Units of Para conduct Probation periods at Agra. The School is Supported by Various Aircrafts of IAF like AN-32, IL-76, C17 Globemaster and C130J Hercules for Para trooping Training. The training module includes the Para basic course . The trainee must complete 5 Para Jumps including one jump with battle load in night. HAHO (High Altitude High Opening) and HALO (High Altitude Low Opening) jump techniques are trained for personnel. The paratroopers graduate from PTS are awarded with Coveted with the Para Wings. The Officers of Parachute Regiment also do their Refresher course at PTS, Agra. The Akash Ganga Skydiving Team of Indian Air Force in also based at Paratroopers Training School in Agra.