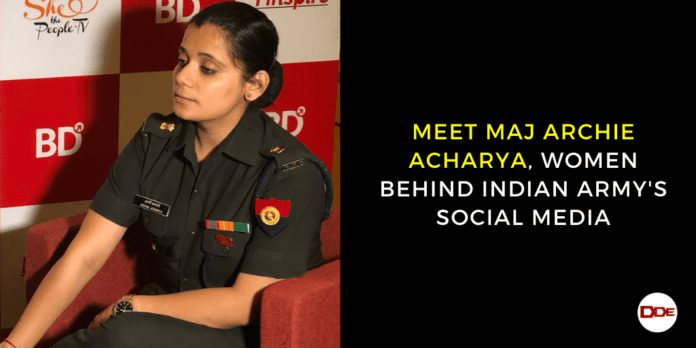 Major Archie Acharya may have joined the Indian Army in 2009, but she harboured a dream of becoming an officer in the armed forces ever since she was in eighth grade.

On her way to school, she would see a billboard with a picture of a smart officer in the olive green uniform asking prospective candidates, “Do you have it in you?” She says that’s the question that shaped her life.

Despite having lost her father at the age of five and being raised by a single mother and going through tremendous financial difficulties, Acharya never compromised on her career and her passion. In an interview with an online platform, she said her mom was her pillar of support. “Ya toh officer ban kar aana, ya mat aana (Either become an officer and come back or don’t come at all),” was what she told her daughter when she was going for her training at the academy.

She wanted to fill out the form to join the Army as soon as she finished school, but came to know she needed to graduate first. She waited, patiently, completed her engineering degree, and then did precisely that and was selected at the first attempt!

She started in the Army with a repair recovery and maintenance role, and for that, she was stationed near the Pakistan border for a few years. She worked in workshops since in the rough mountainous terrain it can vehicle repair can get tough. Her duty was to check and service the equipment used during the night and conduct serviceability checks for them.

For that, she did long-range patrolling at the border and remembers being so close to it that most often than not, her phone picked the Pakistan network, being entirely out of range for Indian network.

Lately, Acharya’s role includes managing the Army’s digital presence as well. She looks into social media strategies and analytics, all based on the digital parameters.

Acharya informed the portal that there was one point when the Army realised why its presence on social media was imperative and essential. It was during the Kargil war. She says the Army did a great job, but by and large the public was unaware. That’s when they thought they could not be “a closed up organisation” and needed to open up. They decided to set up some digital presence and familiarise the citizens with several unknown aspects of the Army.

Handling the official Indian Army website and YouTube channel, Acharya is also in charge of the online campaigns—to present the work of the Army in a positive light and stay relevant.

“In my current role, we are trying to run some social media campaigns. We are trying to be ethical as much as possible because we as Indian Army, we cannot change our thoughts,” she said.

ALSO READ : Corps Of Military Intelligence All You Need To Know