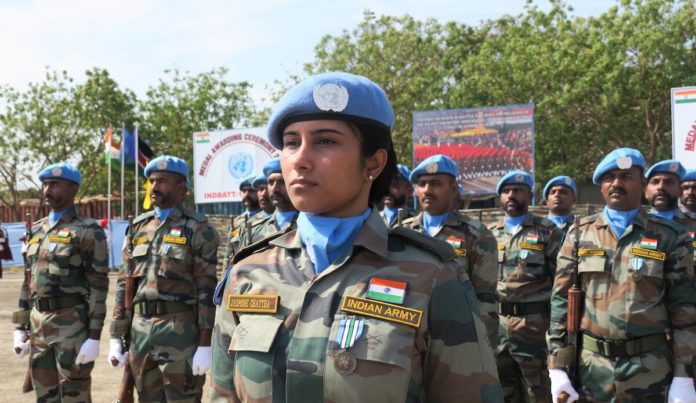 Meet Major Jasmine Chattha who led the Indian Army contingent at UN Peace keeping mission in South Sudan. There was something distinctly different about this year’s medal award ceremony for the Indian peacekeepers in Upper Nile. For the first time, the parade of the large contingent, consisting of infantry, engineers and medical staff, was led by a woman, Major Jasmine Chattha.

“It has been an honour to represent my regiment on this special day. By positioning women as leaders, we are sending a strong message to the citizens of South Sudan in general and its women in particular. In our work, for example when we repair roads or try to mitigate floods, we are in contact with the local population and they can see that we, women, are leading a team and we are both respected and listened to,” she says.

While it is true that India’s peacekeeping contingent in Upper Nile is almost all male, Major Chattha was not the only woman to receive a medal for the outstanding work of her compatriots: five out of the 1,171 troops awarded the shiny pieces of metal were females.

Captain Karishma Kathayat, an engineer, was one of them. Like Major Chattha, she hails from a military family.

“It is a great feeling to contribute to a better standard of living of the people we are here to serve. Our engineering work is something we take great pride in,” she says.

The Indian contingent serving with the United Nations Mission in South Sudan (UNMISS) may be best known for its efforts to build and repair critical infrastructure, but protecting civilians is of course also a vital and sometimes dangerous part of their mandate.

Deadly violence in Adhidiang and Kodok, where some 11,000 displaced persons are still gathered adjacent to an UNMISS military base, has caused untold suffering and injuries. Since September last year, Indian medical staff have performed critical emergency surgeries that have saved the lives of five children.

“Without these interventions, the children could have died, or would have grown up with disabling limb deformities,” states Major Amanpreet Kaur, who is also a doctor. “We have already learned a lot by providing healthcare to both UNMISS staff and our South Sudanese hosts who come for emergencies or special treatment they cannot find elsewhere. Seeing previous patients coming back in good health is a priceless experience, she adds.”

“You have all performed supremely well. You have provided security for thousands of civilians, no doubt saving lives in the process, and created conducive conditions for humanitarian assistance. You have left an indelible and endearing mark in South Sudan,” he summarized the contributions of his compatriots.