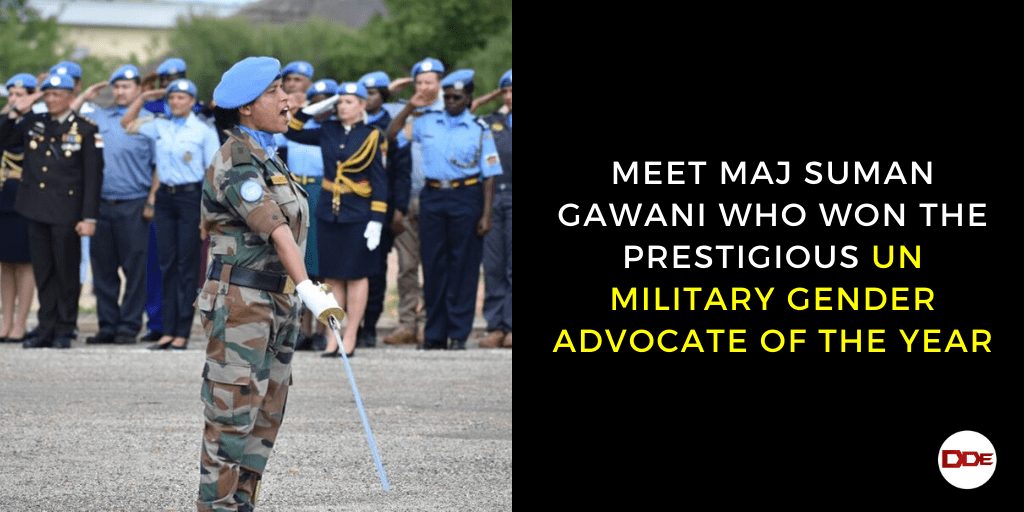 An Indian Army officer Major Suman Gawani have been selected for the prestigious United Nations Military Gender Advocate of the Year Award (2019). The woman peacekeeper were described as “powerful role models” by the UN Chief Antonio Guterres.

This is for the first time that the prestigious United Nations Military Gender Advocate of the Year Award is being shared by two women. Major Suman Gawani and Brazilian Naval Officer Commander Carla Monteiro de Castro Araujo will receive the award during an online ceremony presided over by United Nations Secretary-General Guterres on May 29, the International Day of UN Peacekeepers.

Major Suman Gawani is the first Indian peacekeeper to win the award. She is a Military Observer, formerly deployed to the UN Mission in South Sudan (UNMISS), and had mentored over 230 UN Military Observers on conflict-related to sexual violence, and ensured the presence of women military observers in each of the Mission’s team sites. She also trained South Sudanese government forces, and helped them to launch their action plan on conflict-related sexual violence.

Military observer Gawani joined the Indian Army in the year 2011 where she graduated from the Officers Training Academy, then joined the Army Signal Corps. Speaking on the achievement Gawani said, “Whatever our function, position or rank, it is our duty as peacekeepers to integrate an all-genders perspective into our daily work and own it in our interactions with colleagues as well as with communities.”

On the other hand, Brazilian Woman Commander  Araujo is working in the United Nations’ Multidimensional Integrated Stabilization Mission in the Central African Republic (MINUSCA). Her contribution as a trainer on gender and protection and her instrumental approach in seeing the number of gender-responsive patrols engaging with local communities increase from 574 to nearly 3,000 per month has made her the name entitled for the award.

Expressing gratitude on her win, Araujo said, ”It’s very gratifying for me and the Mission to see that our initiatives are bearing fruit.”

Lauding both the women achievers for their excellent work UN Chief Antonio, said, ”Through their work, they have brought new perspectives and have helped to build trust and confidence among the communities we serve”, he said. “Through their commitment and innovative approaches, they embrace a standard of excellence that is an inspiration to all blue helmets everywhere. As we confront today’s challenges, their work has never been more important or relevant.”