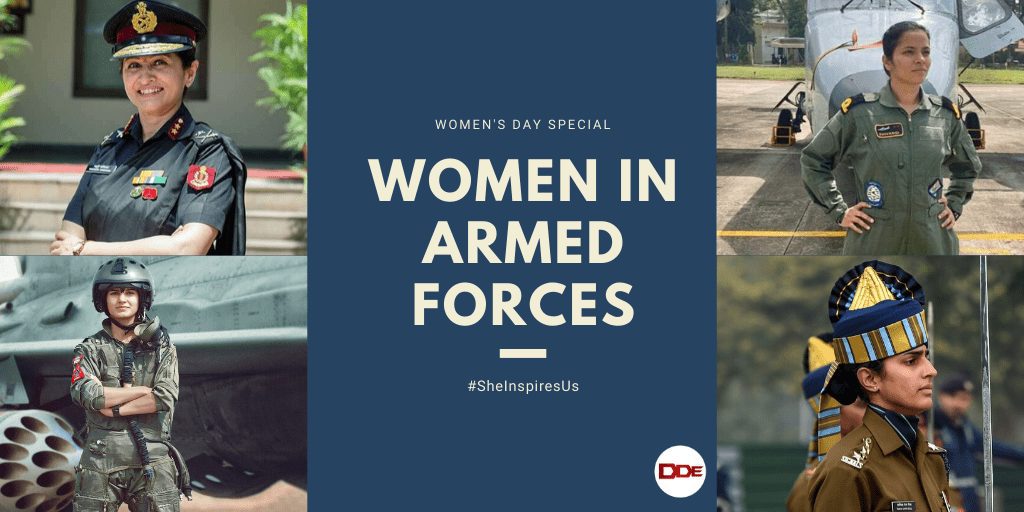 This International Womens Day read the inspiring stories of women in Indian Armed Forces who have excelled in their respective fields. The winds of change continue to sweep the Indian Armed Forces as more women are joining the ranks of their male counterparts in building a successful career serving in the Armed Forces. And they are excelling.

However, other women are creating their paths in male-dominated areas such as flying combat aircraft and serving different roles.

Collectively, they stand as great examples for other younger women to step out and join the forces in serving the nation standing shoulder-to-shoulder with their male counterparts.

January 26, 2020, witnessed Captain Tania Shergill lead an all-male contingent in the Republic Day parade in New Delhi. Capt Shergill is a fourth-generation soldier to serve in the military after her great-grandfather, grandfather, and father.

A B.Tech in Electronics and Communications, Capt Shergill joined the Corps of Signals, where she intends to build on her technical knowledge as she moves up for higher responsibilities. The forces offer tremendous opportunity and motivation to pursue skills and learning based on interest and aptitude.

Sqn Ldr Khushboo Gupta became the first woman chopper pilot to fly to the Siachen Glacier, the world’s highest combat zone. To be cleared for flying to Siachen is no mean task, and many pilots fail to make the grade. Not Sqn Ldr Gupta.

Flying Officer Avani Chaturvedi has carved out a dream career for herself. She became the first female pilot to qualify to fly fighter aircraft. She earned her stripes on a MiG-21 Bison, a mean machine but an extremely versatile fighter aircraft. It’s the same aircraft Wg Cdr Abhinandan flew when he shot down a Pakistani F-16 fighter in the post-Balakot action.

On December 2, 2019, Sub-Lieutenant Shivangi became the first woman pilot of the Indian Navy as she completed her operational training on a Dornier Aircraft at Kochi, Southern Naval Command.

Hailing from Muzzafarnagar in Bihar, Sub-Lieutenant Shivangi had ambitions of becoming a pilot, and she took the first step towards that dream by signing up for the Indian Navy. She has a long career ahead of her, and the Navy will provide her with ample opportunities to learn and upgrade her flying skills.

She is the only doctor on the Prime Minister’s STIAC (S&T) Innovation Advisory Committee. She joins the fast-growing list of successful lady officers in the Armed Forces.

Hyderabad-born Kasturi had never even imagined that one day she would join the force. Not just that, on January 26, she became the first woman Contingent Commander ever of the Indian Army Service Corps to lead an all-men contingent at the Republic Day Parade.

“Growing up, I never knew anything about the Army. I only had an exposure to the army when I joined the NCC and became a cadet during my graduation. It was there that I got to know that there is a career in the armed forces which a girl can also pursue,” Lieutenant Kasturi said in an interview.

Sqn Ldr Shikha has represented India in all three cricketing formats. As one of India’s most accomplished all-rounders, she has played a key role in the Indian cricket team’s rise on the world stage over the past years . She was a member of the Indian Women’s Team that took part in the ICC Women’s World Twenty20 in Bangladesh in 2014 and in India in 2016. Sqn Ldr Shikha has played a pivotal role in the Indian Team’s journey to the finals in the Women’s World Cup held in England in the year 2017 proving to be the team’s dependable wicket-taker.

Sqn Ldr Shikha has represented the country with great pride and honour and continues to enhance her reputation across the cricketing world. She has recently been contracted by the BCCI for the year 2019-2020 and has also featured in the ICC Women’s ODI Team of the Year 2019.

All the women listed above are an inspiration for other young women to come forward and join the forces. They are several other equally inspiring examples of women serving various capacities in uniform, and one day, you could be one of them.