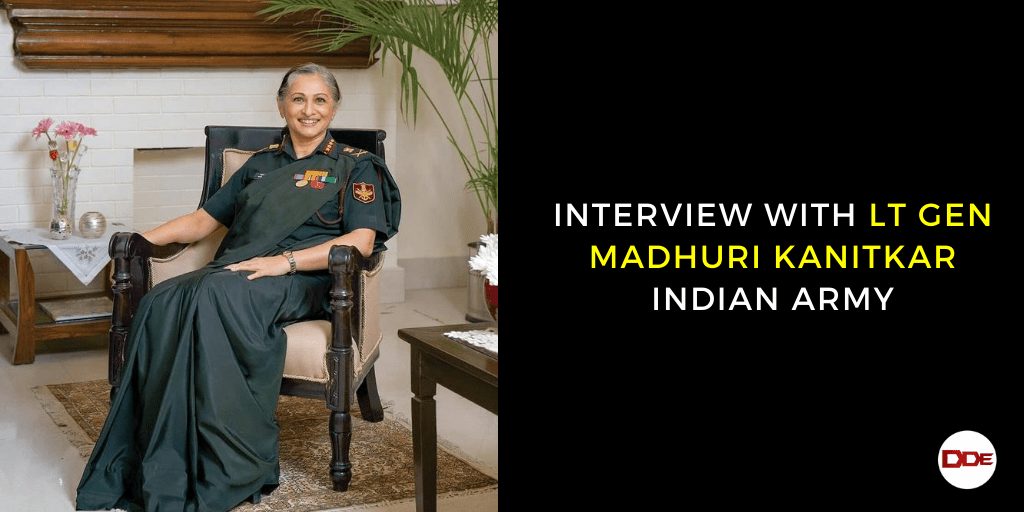 Interview With Lt Gen Madhuri Kanitkar Indian Army. A soldier. A doctor. A teacher. She has taken on all these roles with determination and pride. Lieutenant General Madhuri Kanitkar has taken great strides in being on the forefront, in whatever she undertakes. As the third female Lieutenant General in the history of India, she has broken society-perceived stereotypes. “My parents and teachers never considered gender an obstacle to achieve dreams. My parents taught me and my two sisters that nothing is impossible,” she informs.

Speaking of society-perceived stereotypes, one of those has been that the armed forces are male-dominated. Lt Gen Kanitkar is quick in debunking that myth. “The armed forces predominantly have male workers, but not dominated by gender stereotypes. All my roles, be it a soldier, a teacher, a doctor or for that matter, my appointment today as Deputy Chief Integrated Defence Staff (Medical) has nothing to do with gender. She mentions that she cannot remember a single instance where she had to fight for her ‘rights’ on grounds of gender. Any person required to wear multiple hats needs to be tough to scale the heights of success, she says. “The journey itself has thrown up many challenges and turning them into opportunities has helped me grow as an individual.” Excerpts from an interview:

You were the Dean of Armed Forces Medical College (AFMC) in Pune for several years. Can you tell us a little about your journey?

At AFMC I felt I had achieved a high rung of success in heading my alma mater and had a sense of deep satisfaction as a teacher. As a doctor, I am extremely sanguine in having had the opportunity to set up the first Armed Forces Medical Services’ Paediatric Nephrology Centre and caring for children over the past 30 years. As a soldier, my great desire to contribute towards the health of troops in an operational command was largely fulfilled when I got posted to an Operational Command in Jammu. As a woman, I may have been the first to get an opportunity to serve in all the above mentioned three roles in the Armed Forces Medical Services. However, I have never considered this to be anything special as I felt our balanced organisation lets one achieve these on the basis of pure competence.

You and your husband, Lt Gen Rajeev Kanitkar, are the only couple in the Indian Armed Forces’ history to have reached this rank. How differently do you think you approached your duties owing to your gender?

The goal and journey have been the same. The journey started on a similar platform. Both of us won the President Gold Medal—him at the National Defence Academy on being at the top of his course, and I, for standing first in my batch at AFMC. The path taken has been similar. The pace of walking and the stages may have been different, but then men are from Mars and women from Venus. As long as both perspectives seek the same destination within the framework of an appropriate value system, the journey is streamlined, enjoyable and interesting. It was important to support each other even when being located in two different parts of the country and ‘grow together without growing apart’. I feel a woman has a better natural capability to multitask and communicate, as well as carry a team along by expressing her concerns and appreciation. The man also feels in a similar manner but probably does not express himself in the same way.

When you joined the Army, what was the male/female ratio? You joined at a time when the field was still predominantly male. Did you have trouble being taken seriously?

When I joined the Armed Forces Medical Services, the ratio of girls to boys was 20:100 at AFMC. Today it is 30:120, which is not a great difference, but this is in keeping with the organisational requirement and employability. I have never faced any trouble being taken seriously; in fact, I was taken even more seriously whenever I wanted to get anything done in a mission mode. In the Army Medical Corps, women have been around for years. We train and serve together, shoulder to shoulder. So gender is of little concern. What matters most are capability, professionalism and competence.

The recent Supreme Court ruling is in support of women in armed forces. What has been the reason for it to happen now? Is there any change in operations or is it more about change in opinion?

Women are joining a large number of Arms and Services in the armed forces, such as the Army Services Corps, Judge Advocate General Branch, Engineers, and Signal Corps etc. Recently the MoD has sanctioned permanent commission to women officers in the Army. The requirement of the Armed Forces is changing in keeping abreast with technology and social norms as well. Therefore, the scope for women taking on these responsibilities has become larger and I think that this is a step in the right direction. There is a shortage of officers in the armed forces and hence giving opportunities to capable women benefits both.

Health and defence are the two biggest fields in the spotlight now, and you are in the thick of both! Does the pressure get to you?

Yes, trying to handle both is tough. I ensure that I spend time in yoga and meditation besides regular physical exercise to be physically capable and mentally poised. A fit mind in a fit body helps to overcome this pressure.

Can you share your success mantra for the perfect work/life balance?

Work hard, but don’t forget to enjoy the simple pleasures in life and have fun. The journey is beautiful if you take the time to smell the roses. I have realised that teamwork is important. ‘I’ has to be replaced by ‘WE’ to move from ‘Illness’ to ‘Wellness’. We need to spend time developing a team and giving credit to each member. Individual brilliance has to be supported by collective competence. Also, focus, balance and time management are crucial.

Gender should not come in the way of their choice of a career. It should be their passion. It is important to introspect, reflect and talk to friends and family to help choose a path. At the same time, once a path is chosen, pursue the journey with dedication, passion and perseverance. There will be difficulties, but it is these very difficulties that make you strong. Whichever career you choose, don’t think yourself any lesser. You do not need to be like a man. You are able and capable as a woman. So, go out with courage, confidence and cheer… every time and anytime.