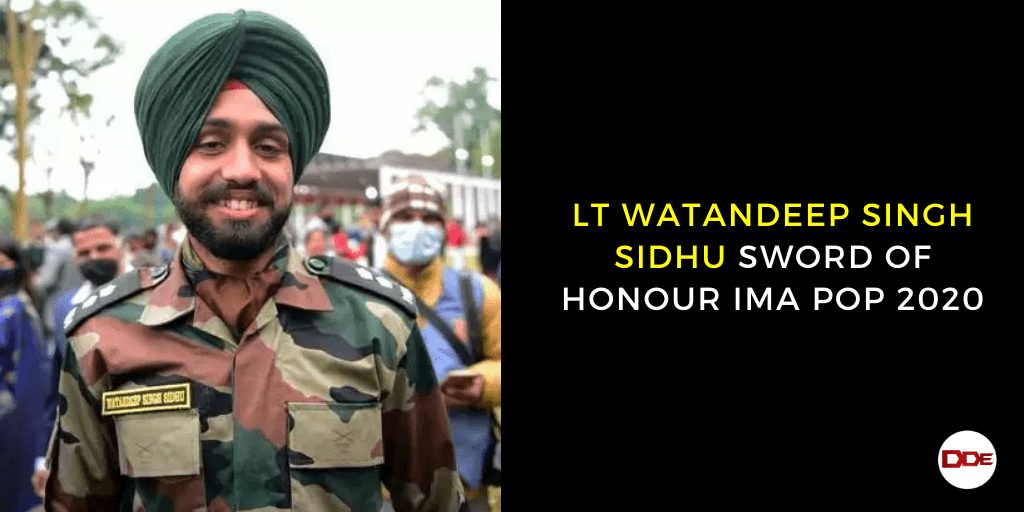 The Sword of Honour for the Autumn Term, 2020, was awarded to Lt Watandeep Singh Sidhu during the Passing out Parade (PoP) held at the Indian Military Academy (IMA), Dehradun, on Saturday. This marks the third time a cadet from Punjab received this honour. Sindhu hails from Threeke near Ludhiana. He also held the rank of Academy Cadet Adjutant in the final term at IMA. Not only this he has been the best student in physical endurance, PT and tactical ability as well.

Sidhu’s father is an engineer and his mother is a school principal. He completed his schooling from Rashtriya Indian Military College, Dehradun, and will be commissioned in the special forces of the Indian Army.

Speaking to the media, Sidhu, who was accompanied by his parents — Baljindar Singh Sidhu and Harbans Kaur — said that becoming an Army officer was his childhood dream and he never thought of pursuing any other vocation. The only child of his parents, Sidhu will now be completing six months’ training for special forces. He was in the National Defence Academy (NDA) before coming to IMA.

The coveted ‘Sword of Honour’ was awarded to Watandeep Singh Sidhu.

His parents said that becoming an Army officer was his childhood dream & he never thought of pursuing any other vocation. 🇮🇳⚔️ pic.twitter.com/y47x73WgLR

“I believe that the Army is the finest profession in any country. I gave my 100% to the training but did not imagine that I would get the coveted Sword of Honour,” said Sidhu, who is the first one in his family to join the Army.

The gold medal for the Gentleman Cadet (GC) standing first in the Order of Merit was presented to Majji Giridhar, who is also the first in his family to get into the Army. His father, Majji Lakshman Rao, works in Coal India Limited in Andhra Pradesh while his mother is a homemaker. Commissioned into Garhwal Rifles, Giridhar was a student of Sainik School.

The silver medal was presented to Nidesh Singh Yadav, son of a farmer from Haryana, who, too, got commissioned in special forces. Shikhar Thapa from Dehradun, son of a Naik Subedar, got the bronze medal, which is awarded to the GC standing third in the Order of Merit. Thapa’s elder sister is also pursuing defence studies.

Chief of Army Staff Banner was awarded to Cassino Company for standing Overall first amongst 16 companies.