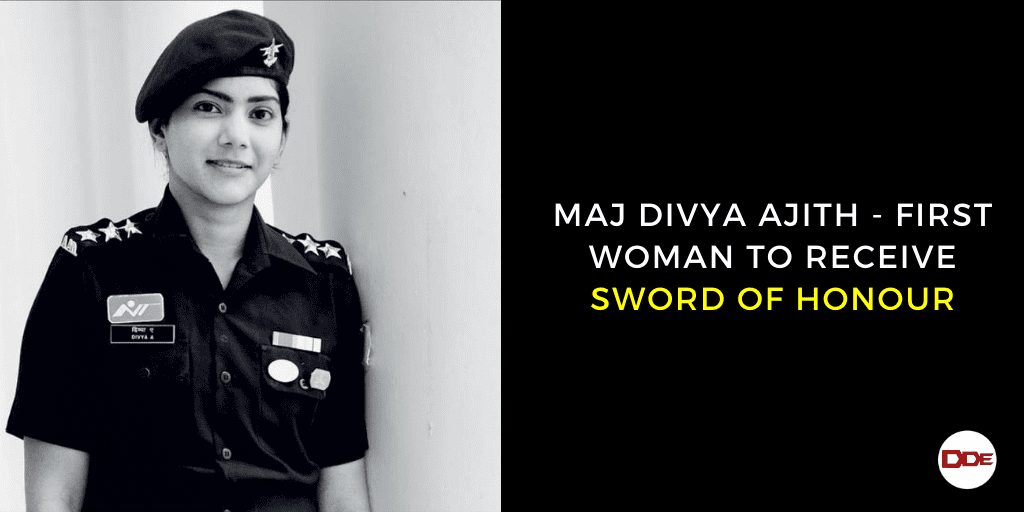 Major Divya Ajith Kumar, an Indian Army officer of Army Air Defence, was the first Lady Cadet to receive the Sword of Honour in the history of Indian Army.

Major Divya, who’s born and brought up in Chennai, was actively involved in NCC during her college life. She excelled at NCC as a cadet and represented her Directorate at the Republic Day Camp 2008. She was also chosen to be the All India NCC girls Contingent Commander because of her leadership skills and went on to win the award of ‘All India Best Parade Commander’ of the day.

After completing her training at Officers Training Academy (OTA), Chennai—where she became the first lady cadet to receive the Sword of Honour—she was commissioned into the Corps of Army Air Defence in 2010. Major Divya goes on to show and prove her strength and grit by acing the Young Officers’ Course of the Army Air Defence College as a topper.

Later she served as an instructor at OTA Chennai and also went to South Sudan as a part of the UN Mission. Major Divya, apart from her job, has a keen interest in sports. She likes participating in basketball and discuss throw. She is also a trained Bharatanatyam Dancer and percussionist.

Talking about her challenges in the Indian Army, Major Divya was quoted by an online portal saying, “I don’t consider them as a sort of discrimination. I took them as a challenge, and if as a girl, I can do it, every other girl can do it. Just following the dreams is what that matters.”