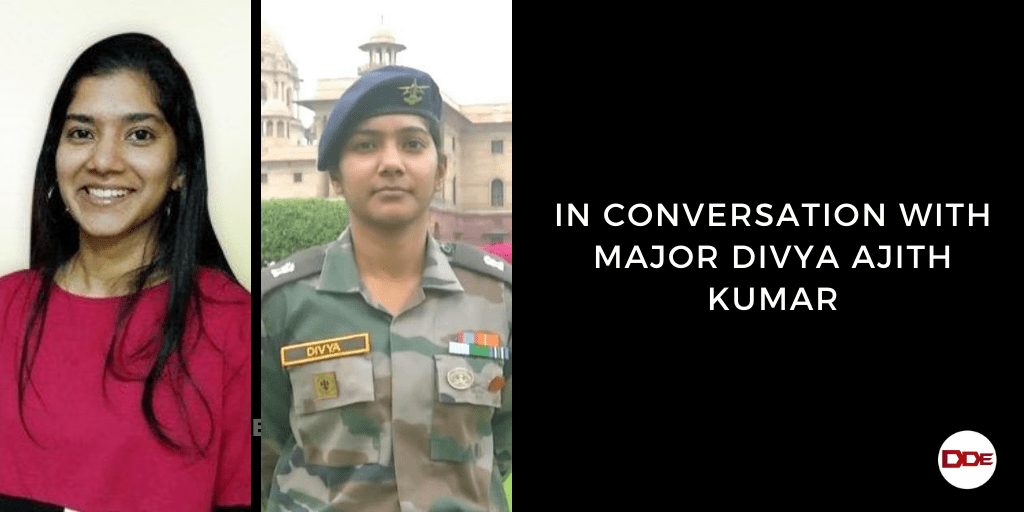 Major Divya Ajith Kumar has made history in many ways. From being a first-generation army officer to becoming the first Lady Cadet to be awarded the coveted ‘Sword of Honour’, her career in the army has been an illustrious one. She also led an all-women contingent of 154 women officers and cadets in the 2015 Republic Day parade.

Divya Ajith Kumar became the first woman in the history of the Indian Army to receive the coveted ‘Sword of Honour’ prize, which is awarded to the best cadet, where she passed with a total of 244 cadets, including 63 women. She is also a multi-faceted personality, Divya is also an accomplished Bharatanatyam dancer, percussionist and well-versed in sports like basketball and discus throw.

What’s your take on gender equality?

We have come a very long way. Even, from what I have seen in my years in service, we have changed a lot in the way we think. But, we still have a long way to go when we talk of gender equality in our country.

Can you tell us how the Indian Army is working towards ensuring gender equality?

Gender equality in the Indian Army is still at its nascent stage, but we are making progress. The army started recruiting women only since 1992. Until then, they weren’t sure about the roles to assign to women. But, thanks to our seniors, this mindset is slowly changing. Also, as women, we have proved that we can do what men can, and do it well. Although, the Indian Army is yet to give us permanent commission, there is a change in the institution’s thinking about women and their contribution.

What has your experience in the Indian Army been like?

My experience, so far, has been really good. I will be completing nine years in the service this year and have not faced any comments like ‘You are a woman. You can’t do this’ and so on. It’s all about how you portray yourself.

What would you say is your biggest achievement so far?

During my days in college, when I was in the National Cadet Corps (NCC), I was awarded the All India Best Cadet and Best Cadet Commander in 2008. That was my biggest achievement. It was also special to my mother as well because she was also an NCC cadet, but couldn’t get the title. She always wanted me to win the award and, finally, she saw her dream come true in the award ceremony in Delhi.

Who is the one woman you look up to and why?

The woman I look up to is my mother. She made sure that she was always there to see me through everything. Whatever I have achieved so far is because of her.

Were you inspired to join the army because of her?

Yes. My mother has always been an inspiration for me. Initially, I wasn’t sure about joining the army as I didn’t know many women who had joined the forces. I wanted to join the police services. But, after I joined the NCC and was exposed to the army, I decided to try for it and got through.

How did your mother encourage you to pursue a career in the army?

My mother was an air force cadet in the NCC, and she has always given me tips on how to carry myself, wear the uniform and so on. She has always been present for all the sessions and tournaments.

Can you tell us about the rest of your family and how they supported you?

Both my father and sister were very supportive. They never forced me to do anything I didn’t want to do. My parents never pushed me to get good marks in school. They knew that I was more into extracurricular activities from my childhood and they understood that.

How do you like to spend quality time with your family?

If you had a chance to go back and change something in your life, what would it be?

I am a commerce graduate. I would probably study more and get a postgraduate degree. Though it wouldn’t make a difference to my career in the army, as I am a short service commissioned officer, I would need to look for a job once I get out of the army. A postgraduate degree would be of help then.

Can you share with us a challenging moment in your life and how you overcame it?

When I got commissioned in 2010, my first posting was in North India. It was very different from what I was used to because my training was also in Chennai, in the officer training academy. So, it was my first time in the north and I had no idea what to expect. I was the only woman posted there along with 800 or 900 men. So, in the beginning it was a little difficult for me to adapt to the environment, but those around me were really helpful and supportive, so I got used to everything soon. I don’t think I missed home much after that.

That I get to wear the uniform every day. When I wear my ranks, I understand the significance of my job. On a lighter note, while wearing the uniform every day in school was boring, thinking of what to wear each day in college was really difficult. I wasn’t interested in dressing up and didn’t have a huge wardrobe. So, for me, in one way, it is of great comfort to know that every day I must wear the same uniform to work.

Share with us how you manage to achieve work–life balance?

Achieving a work–life balance is all about your mindset. There are tasks to be done every day, but when you have a schedule, even if those tasks are difficult, you manage to complete them somehow. It’s important to remember the things that matter to you the most at the end of the day.

Do you have a success mantra?

I keep looking forward and don’t look back, whether it is success or failure. My most favourite quote is Swami Vivekananda’s “Awake, arise and stop not till the goal is reached.”