Capt Gursimran Kaur To Lead The Women Soldiers At LoC 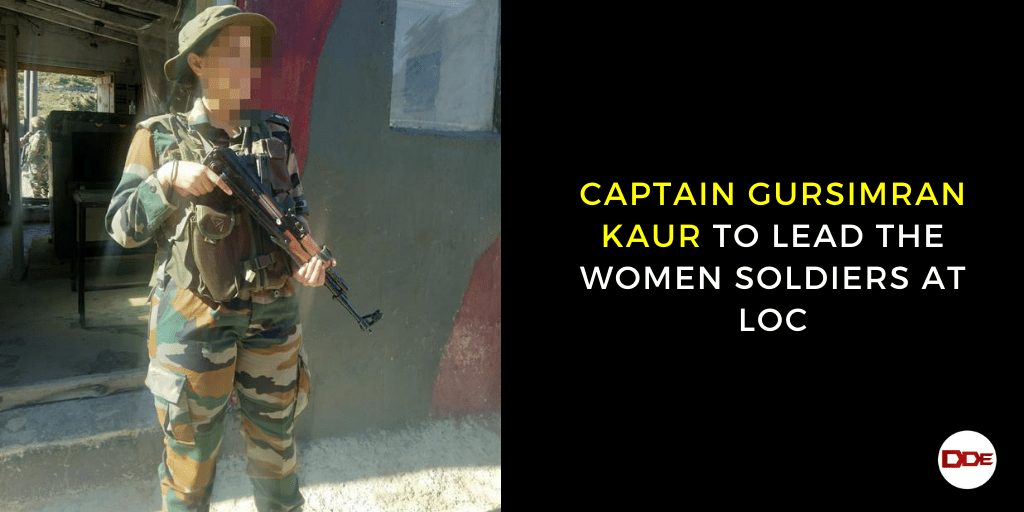 Capt Gursimran Kaur To Lead The Women Soldiers At LoC

Around 30 women soldiers are deployed under Captain Gursimran Kaur of the Army Service Corps (ASC). Capt Kaur is a third-generation military officer of her family. Women soldiers of Assam Rifles have now scripted history as they have joined the security duty along with their male counterparts in the areas adjacent to the LoC.

“The ‘Rifle Women’ joined the duties to make a positive impact on the local population. Deployed at security checkpoints leading to the LoC, the women soldiers are also being used for crowd control and frisking of women because there are intelligence inputs of weapons and drugs being smuggled across,” said an officer.

Army officials say they hope the presence of the women soldiers will, besides “completely ruling out” the possibility of smuggling, ensure a gender-sensitive approach to the Army’s efforts at the Pass.

The officers say that with the LoC so close to the Pass, ceasefire violations are also common along this axis. Most recently, at least six civilians were injured in a shelling episode in Tangdhar on August 7, one of whom later succumbed to his injuries.

Before this, the Indian Army has only been known for inducting women officers in small numbers since the mid-1990s. However, women were also not allowed to join the “fighting arms” of infantry, armoured corps, mechanised infantry and artillery until last year when they began the recruitment of the first 50 women as soldiers in the Corps of Military Police (CMP), who are undergoing training at present. Recently, the Ministry of Defence finally issued a formal government sanction letter which directs that permanent commission will be given to all women officers in the Indian Army.

“A need was also felt for women soldiers in forward locations for frisking and other duties. Women police personnel are not always available in such areas. Till the women in CMP actually join service, we are using women soldiers of Assam Rifles for such duties,” said the officer adding that the Army plans on inducting around 800 women in the military police in the coming years. They will assist in criminal cases like rapes and molestations as well as preserving “good order and discipline” in military formations.

Assam Rifles was a male bastion. However, in 2016, 100 women soldiers were inducted into the country’s oldest paramilitary force. The women had a rigorous training along with male soldiers at the Assam Rifles Training Centre and School in Dimapur town of Nagaland.