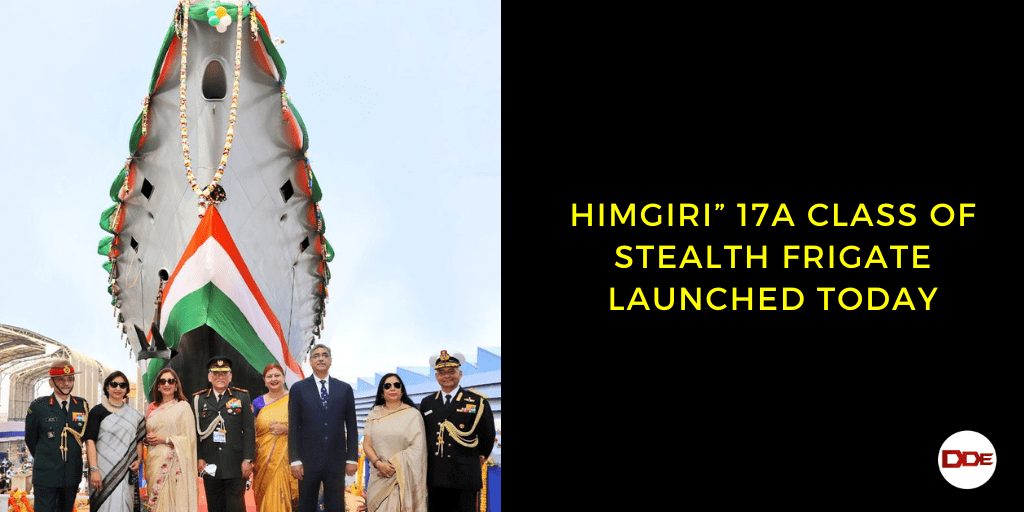 Indian Naval Ship ‘Himgiri’, the first of the three Project 17A ships being built at M/s Garden Reach Shipbuilders and Engineers Limited (GRSE), Kolkata was launched today, 14 Dec 20. She made her first contact with the waters of Hoogly River at 1335 Hrs at the launch ceremony, General Bipin Rawat, Chief of Defence Staff (CDS) was the Chief Guest. In keeping with Naval traditions Smt Madhulika Rawat, spouse of CDS launched the ship to the chanting of invocations from the Atharva Veda. The ship has taken its name and crest of the second Frigate of the Leander Class of ships, which incidentally was launched 50 years ago in 1970.

Under the Project 17A program, a total of seven ships, four at Mazagon Dock Shipbuilders Limited (MDL) and three ships at GRSE are being built with enhanced stealth features, advanced indigenous weapon and sensor fit along with several other improvements. The launch of ‘Himgiri’ has showcased GRSE’s commitment towards the building of three state-of-the-art warships of P17A for Indian Navy. Over the years, GRSE has emerged as a leading shipyard having built over 100 ships. The yard has scaled up its infrastructure and skill sets to meet new challenges in building of P17A ships. P17A ships are the first gas turbine propulsion and largest combat platforms ever built at GRSE.

Since its inception, Project 17A has upheld India’s vision for Atmanirbhar Bharat. P17A ships have been indigenously designed by Directorate of Naval Design (Surface Ship Design Group) – DND(SSG), and are being built at indigenous yards namely MDL and GRSE. Naval shipbuilding provides a great opportunity to energise our economy post COVID-19.

Project 17A ships are sourcing 80% of the material/ equipment required for the project from indigenous vendors and with employment generation for over 2000 Indian firms and MSMEs within the country. Modular construction of the ship through outsourcing, and integrated construction methodology are being used to enhance GRSE’s productivity for delivery of ship targeted in August 2023.