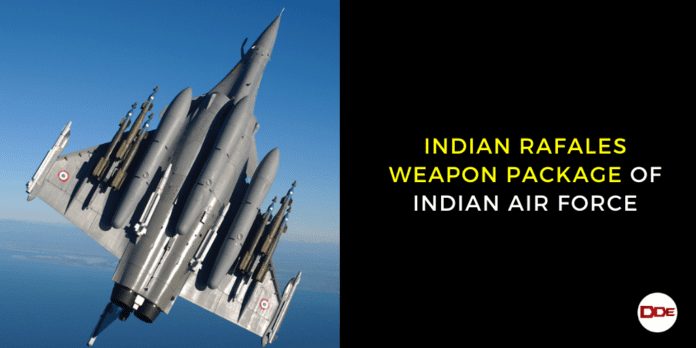 The GIAT 30mm Cannon is especially designed for the Rafale Fighters. With the muzzle velocity of 1025 m/s, the cannon can outrage the enemy Aircrafts easily. The Cannon can fire the rounds from 300/per minute to 2500/per minute.

Mica missile is the short range missile with the warhead of 12 kg. MBDA developed the missile for both Air and ground launch systems. The missile is guided by Inertial Guidance and Data links. The Range of missile is around 70-80 Km. The missile is also fitted in Mirage 2000 fighters of IAF.

The Meteor Air to Air Missile is the beyond Visual Range Missile developed by MBDA. The missile is Active radar guided type of Missile. Total of 180 kg of Warhead is carried in this missile. The range of missile is 100 Km. The missile is been integrated in many of the European Fighters.

The Scalp Missile is air launched Cruise Missile. The missile is developed by MATRA and is manufactured by MBDA. The High value targets are hit by this missile. The Range of SCALP missile is 300 Km. Two stage 450 kg of warhead is carried by Scalp missile. The Missile can be utilized as Anti ship roles.

Hammer missile is precision guided munition development by Safran Defence. It is medium range Air to ground missile with a range of 50-60 Km. The warhead carrying capacity of Hammer missile is 250 kg. The missile is guided by Inertial guidance and GPS.

Also Read : India Is All Set To Receive IAF Rafales Weaponry In July

Indian To Receive Delivery Of Last Rafale By...