India Is All Set To Receive IAF Rafales Weaponry In July 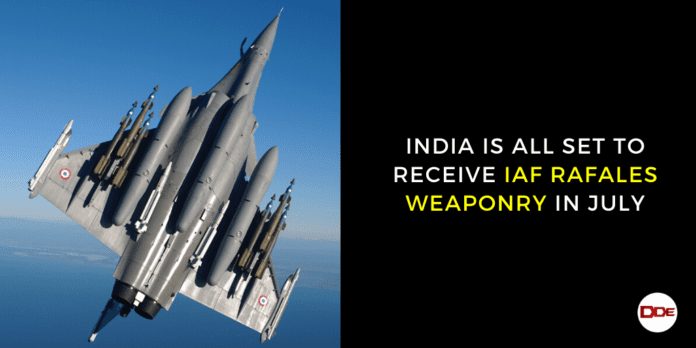 India Is All Set To Receive IAF Rafales Weaponry In July

When the first Indian Air Force Rafale jets land in Ambala on July 27, their weaponry will have already been delivered and stored, ready for operations with the inaugural squadron, ‘Golden Arrows’. The key weapon stocks, including the SCALP cruise missile and Meteor beyond visual air to air missile, have already begun arriving in consignments, with the first lot to be completed by the first week of July.

At least six Rafales will take off from Istres, France and make a single stopover at the UAE’s Al Dhafra air force base near Abu Dhabi. The jets, to be ferried by Indian pilots, will be accompanied by a French Air Force tanker, possible one of the two new A330 MRTT tankers. While the initial plan was to deliver four Rafales, the IAF and Dassault Aviation are working to ensure at least six airframes arrive in one go, with the possibility of that number increasing by a couple of airframes.

By August, the Indian Rafales will be operationally ready. Apart from the inauguration of the Golden Arrows squadron in August-September, the Rafales will likely make their first public appearance at the October 8 Air Force Day flypast over Delhi. The MBDA Scalp is a 560+ km range air to ground cruise missile, while the Meteor is currently the longest range air to air missile in operations. Both weapons outclass anything the Indian Air Force has in its arsenal currently, and are unanimously seen as a major evolutionary step in combat capability. A naval version of the SCALP is incidentally on offer to the Indian Navy too for its to-be-selected P75I submarines. IAF pilots in France have had extensive interactions and briefings from the French Navy and Air Force on Rafale combat deployments over Libya and elsewhere.

Weaponry arriving ahead of new jets is routine. Weapons storage facilities at Ambala have been ready since late last year, with safety certification complete. The IAF Rafale’s weapons will be combat deployable soon after the jets arrive. Training in France, both with the jets and on simulators, has included combat simulations with both weapon types. That training will continue in Ambala.

At the heart of the training ecosystem coming with India’s Rafales is a set of room-sized computers built by Sogitec, a fully owned subsidiary of Dassault Aviation. Termed synthetic collective training, two Sogitec training centres are being installed at Ambala and Hasimara (Hasimara will house the second Rafale squadron), each equipped with two Rafale simulators for initial and hands on training, flight and Weapon Delivery and Navigation System (WDNS) procedure learning including repetition of complete missions with complex tactical environments, two Unit Level Instruction System (ULIS) self-service trainers and one Part Task Trainer (PTT) for guided or free-access training on a restricted number of key procedures. The Ambala training centre will additionally have Rafale Maintenance Trainer and Computer-based Trainer rooms.

While the Ambala and Hasimara bases will be the IAF’s principal Rafale centres, the Gwalior Mirage 2000 station will be fully integrated right from the start for operations and cooperative training. The collective training and synthetic learning architecture being installed at Ambala and Hasimara will be linked directly to a similar module in Gwalior, being set up for the IAF’s upgraded Mirage 2000-5 fleet (several have been upgraded so far out of 51). This will allow pilots at the three bases to fly cooperative simulated missions using both aircraft types on a long list of existing and fresh combat scenarios. These will, of course, include area denial combat air patrol operations on the Chinese front and northern sectors, close air support and interdiction missions in Pakistan-occupied Kashmir, precision strike missions along the Line of Control and cooperative reconnaissance missions/anti-surface missions on both of India’s seaboards. The experience of the Gwalior squadrons, coupled with the new tools coming with the Rafale will be a huge mutual boost to both bases, types and fleets. The upgraded Mirage 2000 jets also share key weapons coming with the Rafales — the MICA air to air missile.

Share
Facebook
Twitter
WhatsApp
Telegram
Previous article
How A Cadet Is Trained At Indian Naval Academy Ezhimala
Next article
How To Answer Why Do You Want To Join The Defence Forces?