Indian Air Force Rafale Is All Set To Arrive In July 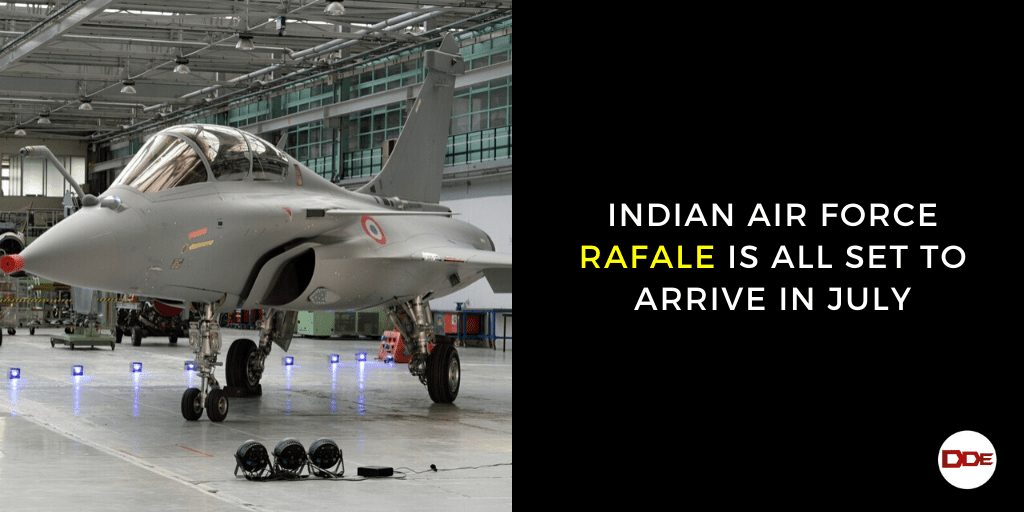 Indian Air Force Rafale Is All Set To Arrive In July

In a major boost to India’s firepower in air, first four Rafale fighter aircraft would start arriving in India by July-end this year from France. The delivery of the aircraft was earlier supposed to have been done by May end but this was postponed by two months in view of the COVID-19 situation in both India and France.

“The first four aircraft including three twin-seater trainer aircraft and one single-seater fighter aircraft would start arriving by the end of July at the Ambala airbase. The trainers will have the tail numbers of the RB series in honour of the Air Force Chief RKS Bhadauria who played a pivotal role in finalising India’s largest-ever defence deal for 36 Rafale combat aircraft”.

The first aircraft to be flown in is planned to be piloted by the Commanding Officer of the 17 Golden Arrows’ squadron along with a French pilot, sources said.

The aircraft on their way from France to India would be refuelled by a French Air Force tanker aircraft in the air before they make a stopover in the Middle East.

“From Middle East to India, there would be one mid-air refuelling done by the Indian IL-78 tanker before they land in India,” they said.

Sources said that the Rafales could have come directly from France to India but a 10-hour flight could have been stressful sitting inside a small cockpit.

The first batch of seven Indian pilots has also finished their training at a French airbase while the second batch would be going to France as soon as the lockdown measures are relaxed in both the countries.

Post lockdown, India received the first consignment of equipment from France when a cargo plane landed in Delhi last week and more equipment would arrive in the near future.

India had signed a deal worth over Rs 60,000 crore with France in September 2016 for 36 Rafales to meet the emergency requirements of the Indian Air Force.

The first four #Rafale fighter aircraft would start arriving in India by July-end this year from France. The delivery of the aircraft was earlier supposed to have been done by May end but this was postponed by two months in view of the #COVID19 situation in both India and France. pic.twitter.com/6yXc6LZBEK

Air Chief Marshal Bhadauria was the Deputy Chief of Air Staff at that time and headed the Indian negotiation team for the deal which is the biggest ever in monetary terms in India.

Armed with the long-range Meteor air to air missiles and SCALP, the Rafales would give India an edge over both Pakistan and China in terms of air strike capability.

Sources said the air to air and the air to ground strike capabilities of the Rafale cannot be matched by both China and Pakistan and the aircraft would give India an edge over both the rivals.