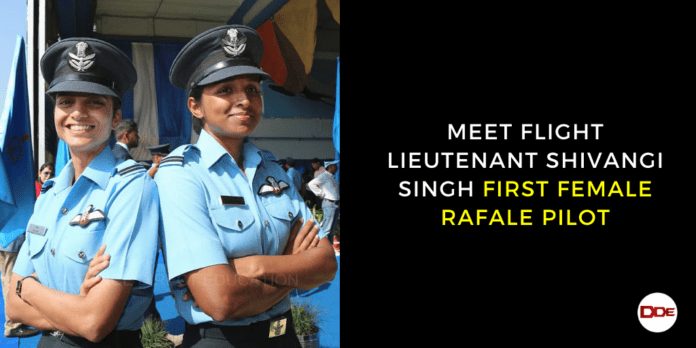 The 17 Squadron IAF will be having first female Rafale pilot soon. Flight Lieutenant Shivangi Singh has been selected to join the 17 squadron as Rafale pilot. Flight Lt Singh has been flying MiG-21 fighters, MiG 21 ‘Bison’, which are considered to be the oldest flying jets in Indian defence. Now she has been appointed to join the Ambala-based squadron to fly the newest addition to Indian defence fleet, the Rafale jets. The pilot is undergoing the conversion training for the Rafale Fighters.

Flight Lieutenant Shivangi Singh hails from Varanasi and is a graduate of Banaras Hindu University. She was also a part of 7 UP Squadron NCC in her college Days. Since childhood, Fl Lt Shivani was passionate about flying and serving the nation. She also represented the Uttar Pradesh team in the Republic Day Parade in Delhi in 2013. Shivangi joined Air force Academy, Dundigal through AFCAT Entry. She got Commissioned into Fighter Stream of IAF in 2017. She was part of the second batch of female fighter pilots, who were commissioned in 2017.

Shivangi Singh completed her Advanced Fighter Training with BAE Hawk Fighter jet. She served as the MiG-21 pilot in the front line fighter base at Rajasthan. She has flown many sorties with the Top Gun of IAF Wing Commander Abhinandan.

Having the experience of MiG 21, She undergoing the conversion training for the 4.5+ Generation Aircraft. She is one of the 10 Women fighter pilots currently serving in Indian Air force. Soon she will be flying the Rafale jet at Ambala based 17 squadron Golden Arrow.