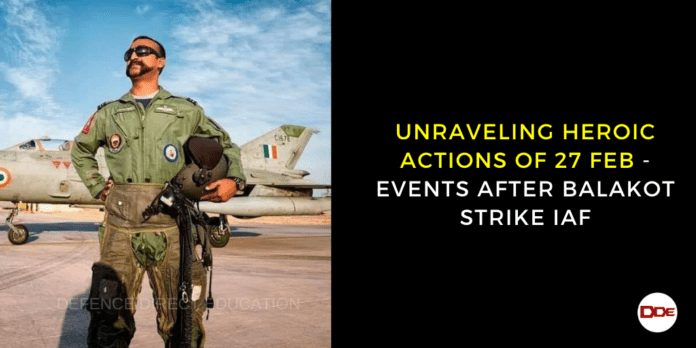 We all are proud that Indian Air Force did a successful Air surgical strike on the Balakot strike. Now lets put a light on the events happened on the next day “Unraveling Heroic Actions of 27 Feb after Balakot strike”. As the Pakistan Air Force was unable to stop and couldn’t retaliate to the IAF attack on the Balakot, they had planned an Operation “Swift retort” to answer the IAF attack a day earlier. The PAF planned to attack the Brigade Headquarters in Nowshera and XVI corps Headquarters in the Nagrota.

The fighter planes took off from the Rafiqui and Sargodha Airbases of Pakistan. The strike package had a total of 24 fighter planes which consisted of American made F-16 Fighting Falcons, Chinese made JF-17 Thunder and French made Mirage III/V fighter jets. All the fighter jets took from their respective bases and made a strike formation above the Pakistan Occupied Kashmir (POK) and made their way towards the Line of Control (LoC).

Behind the scenes, the IAF was ready to face any kind of retaliation and was keeping close eye on the PAF bases. The IAF radars picked up the Pakistani strike package moving towards the LoC and quickly informed the Indian fighters Sukhoi 30 MKIs and Mirage 2000s which were on the CAP (Combat Air Patrol) over the Pir Panjal ranges of the Kashmir.

The Indian Mirage 2000s were equipped with the MICA and Matra Magic II Missiles. The Mirage 2000s started to engage the first formation of Pakistani jets that consisted of  JF-17s and Mirage III/V with the beyond visual range Missiles. The PAF formation faced heavy fire. Unable to reach their target, the formation broke off and went back to the Pakistani Airspace.

For the second Formation of the Pakistani jets, there waiting were the mighty flankers of IAF Sukhoi 30 MKIs. Quickly assessing the situation, the flight controller Squadron Leader Minty Agarwal from 601 signal unit of IAF called out the MiG 21 fighter jets to scramble from Srinagar Airbase and join the Sukhoi 30 MKIs. The formation of four MiG 21 fighter jets took off from the 51 squadron (Sword Arms) IAF from Srinagar base. The formation was led by the Top gun of the IAF Wing commander Abhinandan Varthaman.

The Pakistani F-16s were equipped with the laser guided bombs and AMRAAMs ( Advanced Medium Range Air to Air Missile ). The F-16s fired the AMRAAM missiles on the IAF fighters. But the powerful Radars in Sukhoi 30 MKIs and MiG 21s picked them up and dodged the AMRAAM missiles. By this time Wing commander Abhinandan was chasing the Pakistani F-16 and had locked his Vympel R-73 missile on the F-16. Wing Commander Abhinandan was told to come back but Abhinandan radioed “R-73 locked” and fired the Vympel R-73 on the F-16 . The missile hit the F-16 and the PAF Pilot ejected. It was the first ever kill of the F-16 by a MiG 21 fighter.

By this time, the Wing commander Abhinandan’s MiG 21 had crossed the LoC and entered into Pakistan occupied Kashmir . The SAM ( surface to Air missiles ) batteries of Pakistani Army hit the MiG 21 and Abhinandan ejected. After 60 hours of custody, the Legendary Wing Commander Abhinandan Varthaman returned to Indian soil.

There is a saying in Indian Air Force that,

“To find us, you must be good.

To catch us, you must be fast.

But to beat us……. You must be kidding”