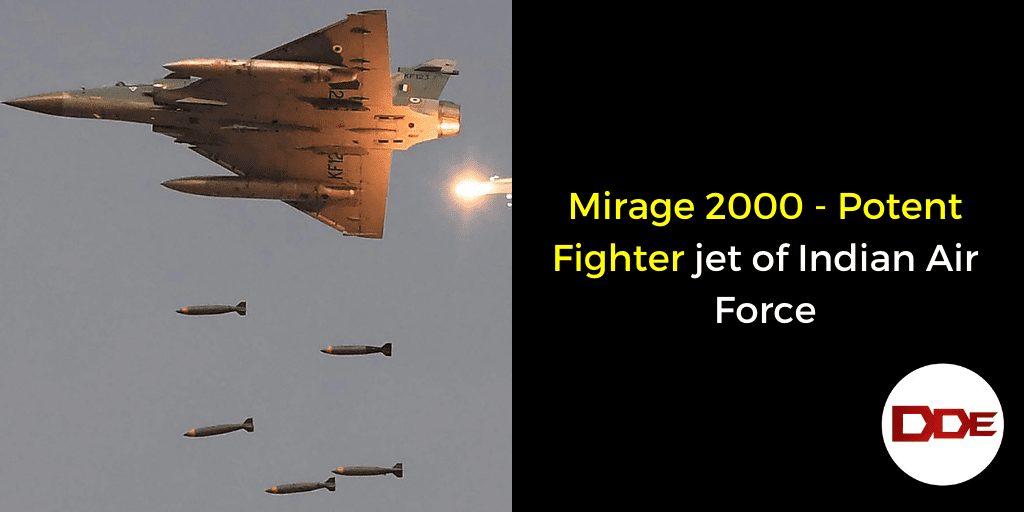 Mirage 2000 Indian Air Force is a single-engine, Multi-Role Fourth Generation Fighter. The French made Strike/bomber Aircraft is based on Delta wing design configuration. Indian Air Force currently operates nearly 40+ Mirage 2000 Aircraft. The No 1 Squadron Tigers and No 7 Squadron Battle-axes. Both the Squadrons are currently based at Gwalior Air Force Station along with a MiG 21 Bison Squadron.

During the 1980s, Pakistan signed a deal with US Govt to procure the then Advanced Fighter F-16. On evaluation, IAF MiG 21 Bison and MiG 23/27 were potent to match the capabilities of F-16. The decision was taken to buy 40+9 Dassault Mirage 2000 from french Govt. In the late 1980s, the Mirages arrived in India, and No 7 Squadron Battle-axes were equipped with Mirages followed by No 1 Squadron Tigers.

Mirage 2000 has participated in many operations of Indian Armed Forces. It played an important role in Operation Safed Sagar of the Kargil War. It has also escorted many Missions of India like Operation White Wash. Both the Squadrons of Mirages are speculated to be assigned to Nuclear Warfare.

In recent times, the Mirage 2000 of No 1 Squadron and No 7 Squadron conducted the Successful Air Surgical Strikes on the Jaish-e-Mohammed terrorist camps in Balakot known as Operation Bandar. The next day in the aftermath, the Mirages in Combat Air Patrol CAP successfully dodged the Pakistan Air Force formation and sent them back.

In the continuation of its brave service, Mirage 2000 is seen as a potent fighter jet of the Indian Air Force. Ongoing conflicts at LAC, the Mirages along with other fighters are deployed near LAC at Leh AFS.

Also Read: How Indian Air Force Is Overcoming The Problem Of Depleting Squadrons