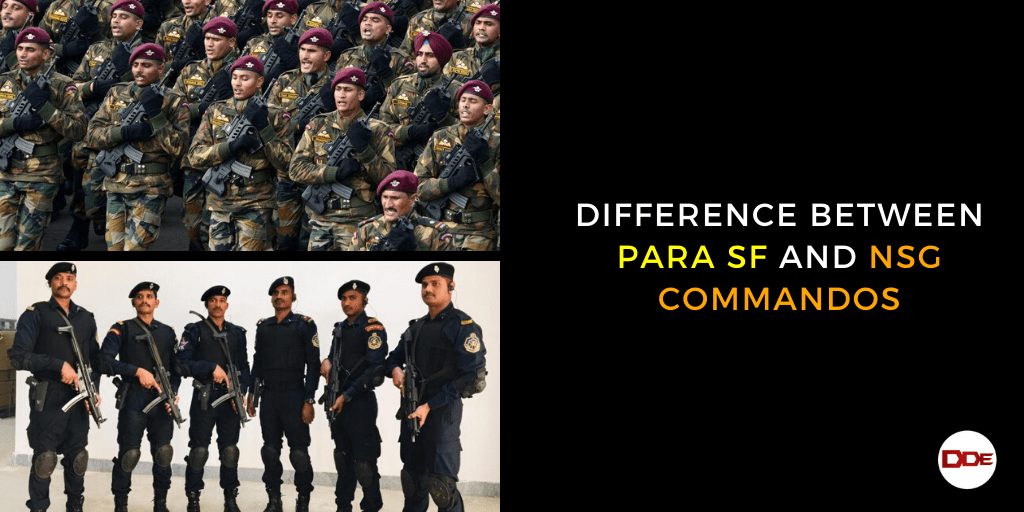 Difference Between Para SF And NSG Commandos. We all know that National Security Guards (NSG) and Para SF are special operation forces. Whenever we see commandos of these two forces, we often fantasise yourself in that combat uniform. Movies like URI – The Surgical Strike and The Attacks of 26/11 had shown how these two forces played their role in their respective operations.

But have you wondered that why in certain operations only NSG is deployed and in other operations only Para SF is on the lead? In this article, we will study the differences between National Security Guards (NSG) and Para SF.

Both the forces are frontline forces of Indian Armed Brigade which are evolved in a long time and with a lot of experience. But as far as their role is concerned, they are different from each other depending on the scenarios.

So now Let’s have a look at their basic differences.

Para SF is the special force under the Parachute regiment of Indian Army operating under the Ministry of Defence. In this elite unit, there are only a hand-picked number of commandos which are built by the volunteers of armed forces personnel. They go through guerilla training with a teration ratio of 75% and are considered as one of the best special forces in the world. There are currently 9 units in the Para SF:

National Security Guards (NSG) is the special operation force under the Home Ministry. It is a blend of volunteers of Indian Armed Forces and Central Reserved Forces. Their role is diversified from anti-terror to protection of VVIPs. NSG has 3 combat groups under them which are classified as per their role

Primary Functions of Para SF are as follows :

Primary Functions of NSG are as follows:

Its combat operations are operated by 3 groups

Para SF along with Navy’s Marcos and IAF garud commandos from the main special forces group. All 3 are trained to carry out ops domestically and internationally. NSG are only trained for rescue ops, hostage crisis etc that happen only within India. So in event of terrorist attacks in India like 26/11, the NSG will get a call and not para sf.