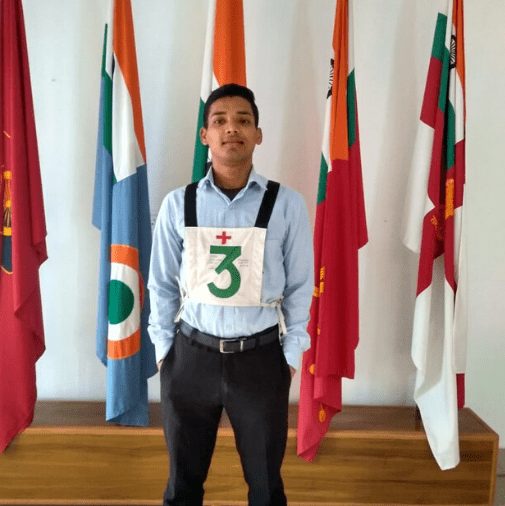 Success story of Saurav Kumar who got recommended for SSC Tech 54 from 17 SSB Bangalore and CDS Entry from 4 AFSB Varanasi. Jai Hind Aspirants, I am Saurav Kumar, BTech graduate in Aeronautical Engineering. I cleared my SSC(T)-54 interview in Dec last year in my second attempt (1st being NDA). Being an Army Brat this was the first profession that I had seen so many other fields was never an option. I have been an average student in academics but I was always very inclined towards sports and co-curricular. I have been an athlete, swimmer, and above all an NCC cadet. During my college, I was always keen to gain experiences of everything and anything (as the army says: jack of all). I also did a number of camps in NCC (ALC,AIVSC, PBC). NCC played a vital role in shaping my fauji attitude. I was also very interested in organizing College fests and events which made me a great team worker and adaptive to situations. And what I think was most important in facing my personality was all the minor and major incidents of my life…SSB was all n all quite smooth and easy-going. My interview went for about 90mins. I was given repeated tasks in GTO which I was able to perform efficiently.

Even in my Psych evaluation every picture that I saw I was able to relate it to an incident in my life directly or indirectly and hence my stories were quite unique from others, in fact in my screening, I was the only one whose narration was completed. Out of 36, 3 of us got recommended. To all the Aspirants out there I would suggest working out on your personality and analyzing yourself daily. Before the screening what I recalled every experience of my life that I could in a flashback in order to revive my senses. I also suggest u guys be honest (I even had Backlog that I told him about), conscious and to stay updated about yourself and the nation.

Day 1: About 360 of us reported at the SSB and then began the screening process. OIR was mostly calculation based and non-verbals. I referred OIR ebooks of DDE as a result the OIR test was a cakewalk for me. Those of you going to Bangalore may expect OMR soon, as we were tested for it. After that, we were made to sit for our ppdt. PPDT was not that hazy as people say. The first thing I observed in the picture were the number of people, their actions and background. While writing the story I was able to do it in time. Then we were divided into groups of about 25-28 of each. We were briefed and the narration started. I was the only one in the group whose narration was completely listened to. I personally think narration would have played a vital role as we were not given more than 3-4 mins for GD. A total of 37 of is were screened in.

Psychology: Psych was mentally straining as always. In Thematic Apperception Test observed the same above mentioned things in the picture and thought a wrote how I would react in that situation. I don’t remember making any conventional Stories. My stories generally revolved about college, ncc, my job as flight safety, sports, organizing and managing etc. I was able to do all the WATs and 52 of SRTs. For SD, I prepared it beforehand by asking my friends and colleagues what they feel about me and then modifying it. Referring the SSB Psychology Ebook of DDE helped me a lot in psych test.

GTO tasks were fun, during the first GD, all the 10 of us were supporting the same point that was fun. I prepared a good plan in GPE but was not selected for narration. Obstacle tasks were also great. I was able to give quite a few solutions. Snake race was a thrill as always. In the individual obstacles test, I was able to do 13 of them. In lecturette my card was not very lucky, I received: stemcell, Saina Nehwal, my favourite pastime and international schools. I was able to speak fo about 2:45 on that. During the Conference, I was nervous as hell but it went down smoothly and the results were declared soon, 3 of us were recommended.

2) My second recommendation was from 4 AFSB Varanasi for CDS entry. This was the first time I faced an AFSB. We reported in the morning and soon got over with the verification. During the OIR test, I luckily got one of sets that I received in my previous SSB, so that was perchance the luck factor that people talk about. In the PPDT, I saw that I was the  only one who had made a different story and almost all of the boys made a story revolving around the same theme. As soon as the discussion began I saw that the most narrated idea was taken up as the common idea so I went with the flow and started setting up congruency between my story and the common story, I was being affirmative during the discussion but I also gave chance to others as well. I  was nominated to give the common story. Soon the results were declared and out of 100 guys, 58 of us were selected.

We were sent for the detailed document check and then the Psych evaluation started. I started and was again able to relate all the pictures to my life experiences. I wrote about putting myself in the picture, I was able to complete all the WATs and 52 of the SRTs. SD strategy was the same as the previous one. The AFSB Psych evaluation is really straining as we had no time to rest, but it was over even quicker than it started

GTO was fun as always, As the GTO says, it is a series of games we will be playing. For GD I suggest Aspirants read about whatever is burning. In lecturette I again got Not so common topics, Advertisements, My favourite Freedom fighter, Stem Cell(again) and One more that I cannot recall. In PGT and other tasks, I gave a very good response. Here I would suggest the aspirants stay alert and analyze the structures carefully and to use resources keeping in mind the rules of the tasks. In GPE I made quite a logical plan and was able to convince others to follow quite a few points from my plan. My suggestion here is that the person should be thinking logically and be planning efficiently. In Individual Obstacles, I did 13 obstacles. IO are very exhausting and require upper body strength.

MUST READ : GTO Tips For Better Performance In SSB Interview

Interview was very quick this time, I was asked questioned ranging from my personal to professional life including my reasons to join the forces, basic knowledge about the organization and some questions related to my associations with my family, friends, etc. My suggestion here is, be ready to face any type of question, don’t get uncomfortable on listening to something too personal.

I was the first person to be conferenced despite being chest no. 49. I hadn’t even sat properly and was wished good luck and asked to go out. This gave me quite a feeling that I was getting recommended this time as well. 6 of us got recommended. 3 of us including me couldn’t clear our PABT and were shifted to our Second Preference, mine was the army.

So the zest of everything is, Be whoever You are and the only preparation you need to do is to enhance your personality in every way possible. I would like to thank DDE for their e-Books especially the OIR and the Psychology Book that I purchased from their website. Thanks a Lot. Jai Hind.