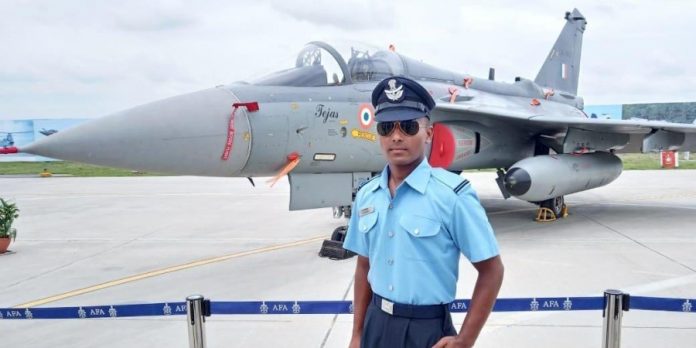 The son of an auto driver from Vizag has made his parents proud when he became a commissioned officer in the Indian Air Force. Flying Officer G Gopinadh was commissioned as a flying officer in the IAF at the graduation ceremony held at the Air Force Academy at Dundigal in Hyderabad on Saturday.

His father Suribabu, who resides at SIG Nagar in Arilova, has been eking out a living as an auto driver for the past 25 years.

Despite financial difficulties, Suribabu put all-out efforts to enable his son achieve his dream of joining the IAF. Gopinadh is the only one from both the Telugu states who was selected as an IAF officer this year. An elated Gopinadh said that though his father was not rich, he used to meet his needs and his sister’s from the hard-earned money. “My parents have done a lot for me and I always wanted to give them back and make them proud,” he said.

When his father asked him to do engineering for which he was ready to procure a loan, Gopinadh joined degree against the wishes of his father. He has a dream to join defence forces like his grandfather, who worked as a sepoy in Indian Army. To pursue his ambition, he joined the IAF as an airman. But he did not let his aspiration away to become an officer in the IAF.

After joining the IAF, he completed degree and did post graduation in distance learning from Andhra University. He was promoted as cryptographer last year. However, his ultimate dream came true when he cleared the Staff Selection Commission examination to become an IAF officer. Gopinadh’s sister Gowri said all their family members and neighbours were very much excited when they watched the live streaming of her brother’s graduation ceremony from the Air Force Academy at Dundigal.

“My brother had a dream and passion to pursue a career in the IAF since he was in higher secondary school,” Gowri said, adding that his brother did Intermediate from Vizag Defence College.

Her parents are immensely happy as their son reached a top position in the IAF. Gowri said since their father did not have proper education, he wanted his children to do higher studies. Gowri did MSc and is working as a lecturer in a private college. Only after she and her brother got jobs, their financial difficulties were alleviated, she said.

“I had worked hard to give better education to my children and my efforts have yielded fruits now,’’ an elated Suribabu said. Gopinadh said he will work hard to get his parents all the happiness in the world as they sacrificed their happiness all along for him. He knew when his father used to sleep late in the night and get up early in the morning only to earn additional income for their needs.