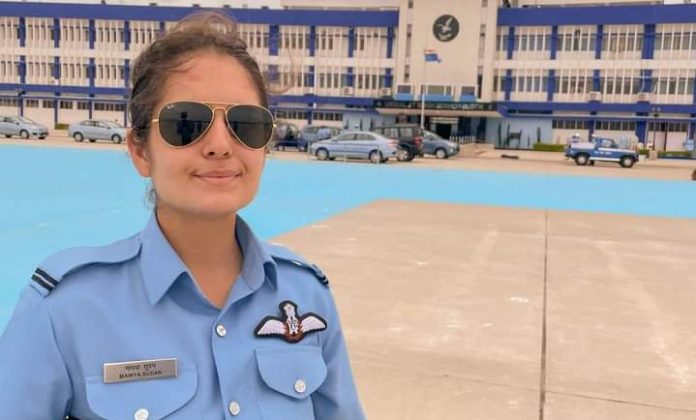 Flying Officer Mawya Sudan, daughter of Sushma and Vinod Sudan has become first women officer from Rajouri district to be inducted as a Fighter Pilot in the Indian Air Force. Hailing from village Lamberi, tehsil Nowshera of district Rajouri, Mawya Sudan commissioned into the IAF as Flying Officer.

She has become the 12th women officer and first from Rajouri to be inducted as a Fighter Pilot in the IAF as Chief of the Air Force, Air Marshal Bhaduria reviewed the combined graduation passing out parade, held today at the Air Force Academy, Dundigal, Hyderabad.

The Fight Pilot’s father, Vinod Sharma, who is a JE in SMVD Shrine Board, told the Excelsior that since her school days, Mawya was included towards Air Force and always wanted to become a Fight Pilot.

Addressing the Parade, CAS commended the significant milestone achieved by the Air Force Academy in achieving over 20,500 flying hours in the last one year – the highest ever in the Academy’s history.