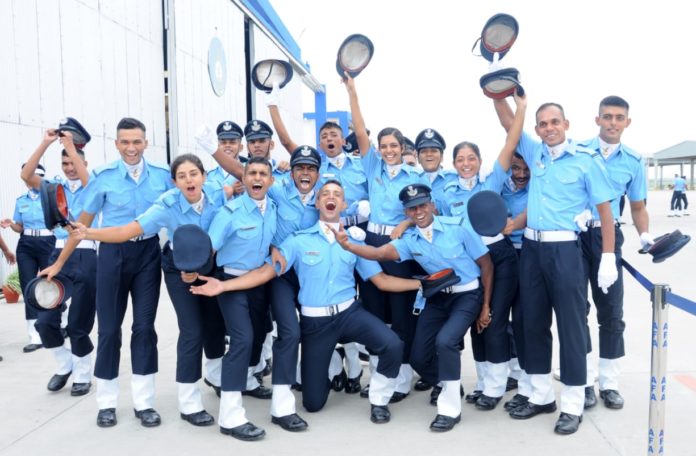 The Combined Graduation Parade (CGP) was held at Air Force Academy (AFA) Dundigal Hyderabad on 19 June 2021, marking the successful culmination of training for 161 Flight Cadets of Flying and Ground Duty Branches in the Indian Air Force. Chief of the Air Staff, Air Chief Marshal RKS Bhadauria PVSM AVSM VM ADC was the Chief Guest and Reviewing Officer of the CGP, where he conferred the President’s Commission upon the graduating flight cadets. On this occasion, 6 officers from the Indian Navy and 5 officers from the Indian Coast Guard were also awarded ‘Wings’ on successful completion of their flying training.

The Reviewing Officer was received by Air Marshal RD Mathur PVSM AVSM VSM ADC, Air Officer Commanding-in-Chief, Training Command and Air Marshal IP Vipin AVSM VM Commandant Air Force Academy. Chief of the Air Staff was presented with a general salute by the Parade on his arrival followed by an impressive march past. Highlight of the parade was the ‘Pipping Ceremony’ in which the graduating flight cadets donned their ‘Stripes’ and were awarded ‘Wings’ & ‘Brevets’ by the Chief Guest. The newly commissioned officers were then administered the ‘Oath’ by the Commandant of AFA in the presence of the Reviewing Officer and other dignitaries.

Addressing the Parade, CAS commended the AFA and other Training Establishments for timely completion of the training despite severe Covid constraints placed upon the training infrastructure. He noted the significant milestone achieved by the Air Force Academy in achieving over 20,500 flying hours in the last one year – the highest ever in the Academy’s history.

The grand ceremony culminated with the newly commissioned officers stepping out in slow march to the traditional notes of ‘Auld Lang Syne’; as they received their first salute from the junior course. They then went past the Saluting Dias and passed through the portals of the Academy, symbolising the beginning of their journey in the Indian Air Force.