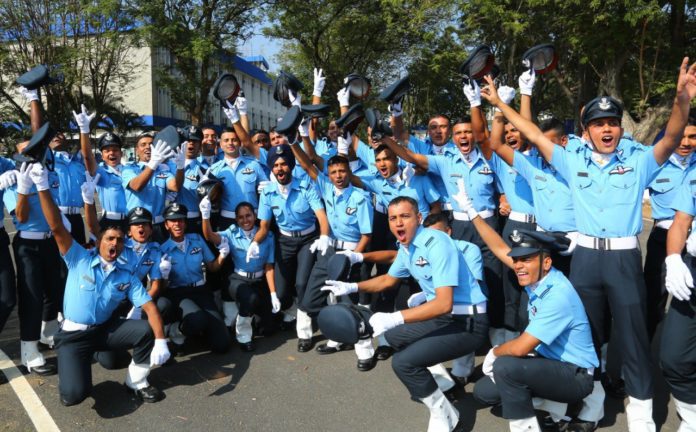 To mark the successful culmination of Training for 175 Flight Cadets of Flying and Ground Duty branches in the Indian Air Force, a Combined Graduation Parade was held at the Air Force Academy, Dundigal on 18 December 21. Air Chief Marshal VR Chaudhari PVSM AVSM VM ADC, Chief of the Air Staff was the Reviewing Officer (RO) of the Passing out Parade, where he conferred the ‘President’s Commission’ on the graduating Flight Cadets who successfully completed their professional training . The graduating officers also included 28 women who joined the growing number of women officers in the IAF. On this occasion two officers from the Indian Navy, nine officers from the Indian Coast Guard and three Cadets from Vietnam were also awarded Wings on successful completion of Flying training.

The Reviewing Officer was received by Air Marshal Manavendra Singh AVSM VrC VSM ADC, Air Officer Commanding-in-Chief, Training Command and Air Marshal S Prabhakaran VM, Commandant, Air Force Academy. The Reviewing Officer was presented with a Ceremonial Salute by the parade, followed by an impressive march past. The highlight of the parade was the ‘Pipping Ceremony’ in which the graduating Flight Cadets were awarded their ‘Stripes’ (Air Force rank) by the RO.

The newly commissioned officers were then administered the ‘oath’ by the Commandant of the Academy in the presence of the Reviewing Officer and other dignitaries. During the Ceremonial Salute and ‘Antim Pag’ (Last Step), a well coordinated and synchronised fly past by Pilatus PC-7, Hawk and Kiran trainer aircraft and Chetak helicopters added colour to the occasion. Many other events, which would otherwise have been part of this Combined Graduation Parade, were cut down as a mark of respect for the CDS, Mrs Rawat and 12 personnel of the Armed Forces who passed away in the recent air accident.

After the ‘Pipping Ceremony’ the Reviewing Officer gave away various awards to the Flying Officers who excelled in diverse training disciplines.

Flying Officer Shashwat Bhardwaj from the Flying Branch was awarded the President’s Plaque and the Chief of the Air Staff Sword of Honour for standing first in overall order of merit in the Pilots’ Course.

Flying Officer Shrikant Mishra from the Navigation Branch was awarded the President’s Plaque for being first in the overall order of merit in the Navigation Course.

Flying Officer Astha Kaur was awarded the President’s Plaque for being first in the overall order of merit in the Ground Duty Officers’ Course.

In his address, the Reviewing Officer complimented the newly commissioned ‘Flying Officers’ for their immaculate turn out, precise drill movements and high standards of parade. Addressing the passing out Cadets, the Chief of the Air Staff said, “the IAF is on the cusp of transformation into a highly potent Air Force with new induction like Rafale, Apache, Chinook and a wide variety of SAGW systems. Today, as you graduate and move into an environment that is challenging and technology intensive, the IAF looks upon young and dynamic officers like you to carry forward the rich legacy of professional attitude, aptitude and temperament shown by your predecessors.” The Chief of the Air Staff further said, “as military officers, you are bound to face certain hardships in your career. Never allow these hardships and constraints to affect you mentally and physically.”

The grand ceremony culminated with the newly commissioned officers marching-out in two columns in slow march to the notes of ‘Anandaloke’ by Rabindranath Tagore, acknowledging the first salute given to them by their immediate juniors. They marched in step past the Reviewing Officer with synchronous strides. The newly commissioned officers passed through the Academy portals to commence their journey in the service of the nation and take-on all future assignments and challenges.

The Combined Graduation Parade holds a special place in the heart of every Air Force officer, as on this particular day, they pledge to safeguard the security, safety, sovereignty and honour of the country. The Commission ceremony remains forever etched in the minds of Air Force officers, as they earn their ‘Stripes’ in the presence of their proud parents.