Remembering Marshal Of The IAF Arjan Singh On His Birth Anniversary 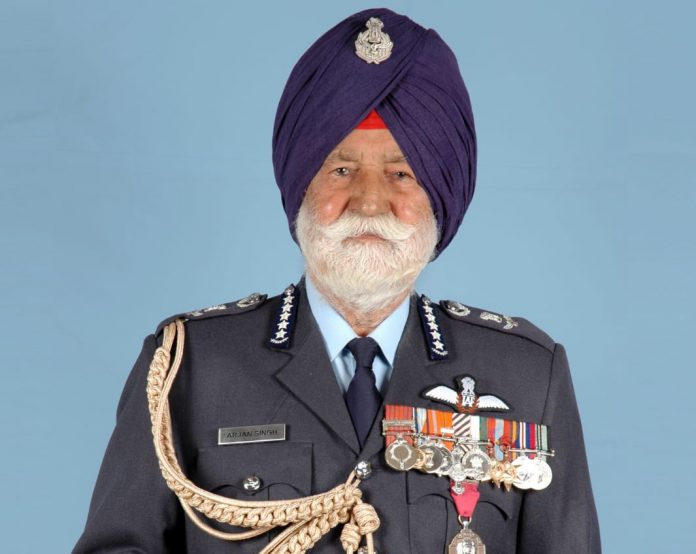 Remembering Marshal Of The Indian Air force Arjan Singh On His Birth Anniversary. Arjan Singh was born on 15 April 1919 and since his early days as a student, he has been an achiever. An ace swimmer, he held an all-India record in free style swimming in one mile and half mile events. Arjan Singh was 19 years of age when he was selected for training at RAF Cranwell in 1938. He topped the course among his batch of Indian Cadets He was the vice captain of swimming, athletics and hockey teams during his training at Royal Air Force College Cranwell.

For displaying outstanding leadership, great skill and courage in Burma Campaign during World War II. He was awarded the Distinguished Flying Cross (DFC) in 1944.

Beginning Aug 1945, Wg Cdr Arjan Singh was selected to undergo the RAF Staff college at Bracknell in the UK. 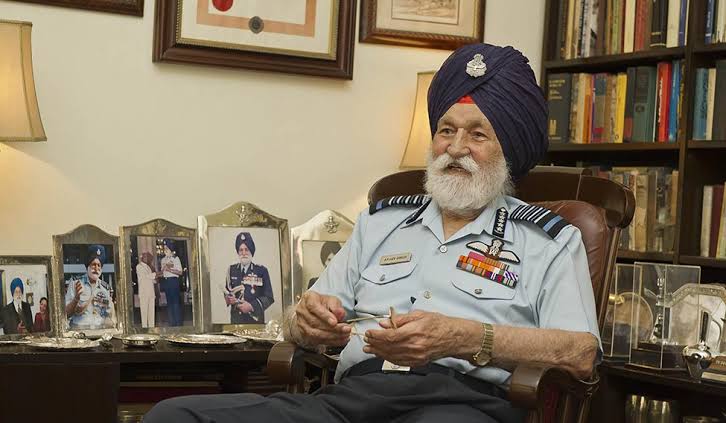 On 15 Aug 1947, he had the unique honour of leading the flypast of over a hundred IAF aircraft over the Red Fort and on the same day, he assumed the command of Air Force Station, Ambala in the rank of Group Captain.

In addition to the high standards of Arjan Singh set in flying and training, he stabilised the administration, with a fair hand and enabled it to recover from the triple shock of demobilisation, partition of the country and the Air Force, and communal riots of unprecedented scale.

In 1949, Air Commodore Arjan Singh took over as the Air Officer Commanding of Operational command, which later came to be known as Western Air Command. Arjan Singh had the distinction of having the longest tenure as the AOC of Operation Command, from 1949-1952 and again from 1957-1961. Promoted to Air Vice Marshal, he was the AOC-in-C of Operation command. Towards the end of the 1962 war, he was appointed the DCAS and became the VCAS in 1963. He was the overall commander of the joint air training exercises “Shiksha” held between the IAF, RAF and RAAF thus laying the foundation of acquisition of new RADAR systems for IAF and training of IAF officers in USA for advanced gunnery course. He was also instrumental in planning and setting up of Armament Training Wing at Jamnagar, and later the Air Force Academy in 1967. 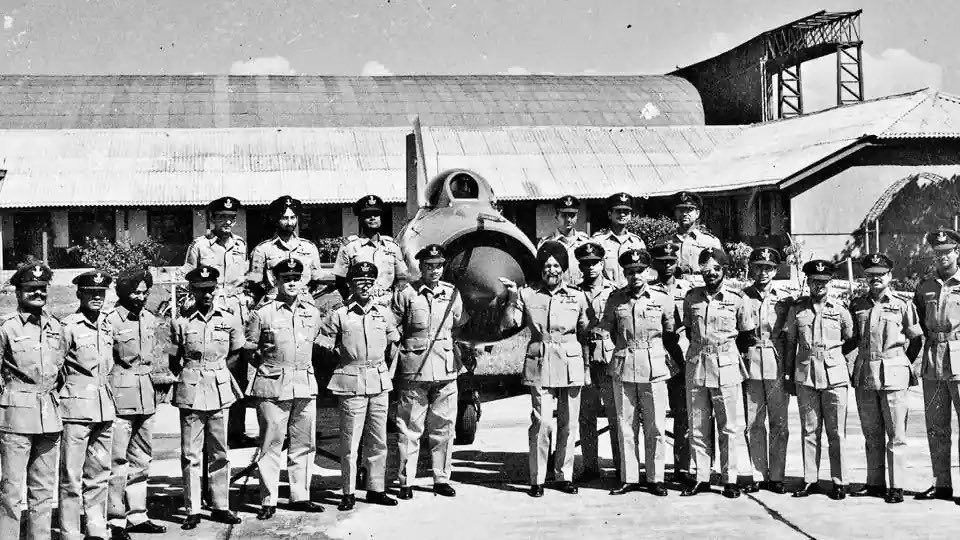 As Chief of Air Staff, Air Marshal Arjan Singh led the Indian Air Force in the 1965 War against Pakistan, wherein the IAF was able to blunt the Pakistani armoured thrust at Chamb, gained air superiority over the PAF and helped the Indian Army score Strategic victories.

In his career, Arjan Singh flew more than 60 different types of aircraft ranging from Pre World War II era bi planes to the supersonic MIG-21. He flew his first solo on MIG-21 as Chief of the Air Staff and remained a flyer to the end of his tenure in the IAF, visiting forward squadrons & units and flying with them.

Arjan Singh has remained a source of inspiration to fellow Indians and Officers. His simple formula for success is summed up in a few words by him.

Firstly, you should be thorough in your profession of everyone;
Secondly, complete the job at hand to the satisfaction of everyone;
Thirdly, you must have implicit faith in your subordinates;
And fourthly, your efforts should always be honest and sincere.

YB Chavan, Defence minister of India during the 1965 war described him as the jewel of a person, quietly efficient and firm, unexcitable but a very able leader. 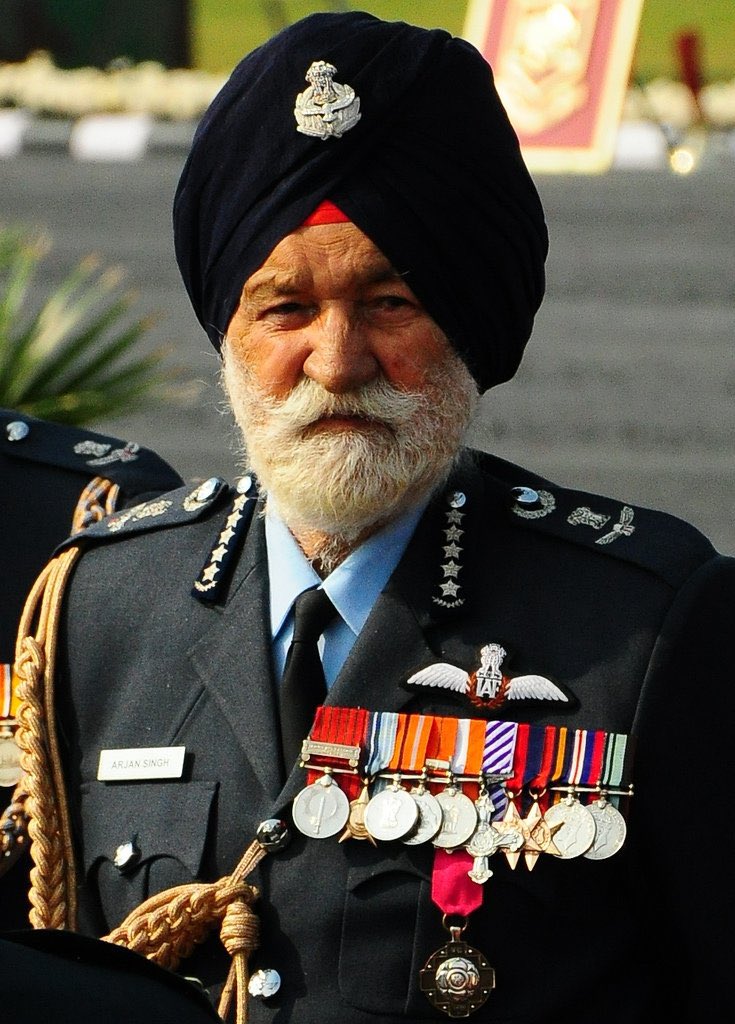 After retiring from the IAF, Arjan Singh remained active and supportive of various causes for the welfare of air force veterans. Towards this end, he set up a trust in 2004 by contributing Twenty million rupees from his personal wealth to it.

On 17 April 2007, Dr Manmohan Singh, Prime Minister of India, wrote to Arjan Singh and honoured him as Marshal of the Air Force and mentioned that the nation looked up to him as a source of continuing inspiration, wisdom and strength to the Indian Armed Forces.

Marshal of the IAF Arjan Singh passed away on 16 Sep 2017. His dynamic personality, professional competence, honesty of purpose in his service to the IAF and the country truly sets him apart as a leader and an icon of the Indian Air Force.