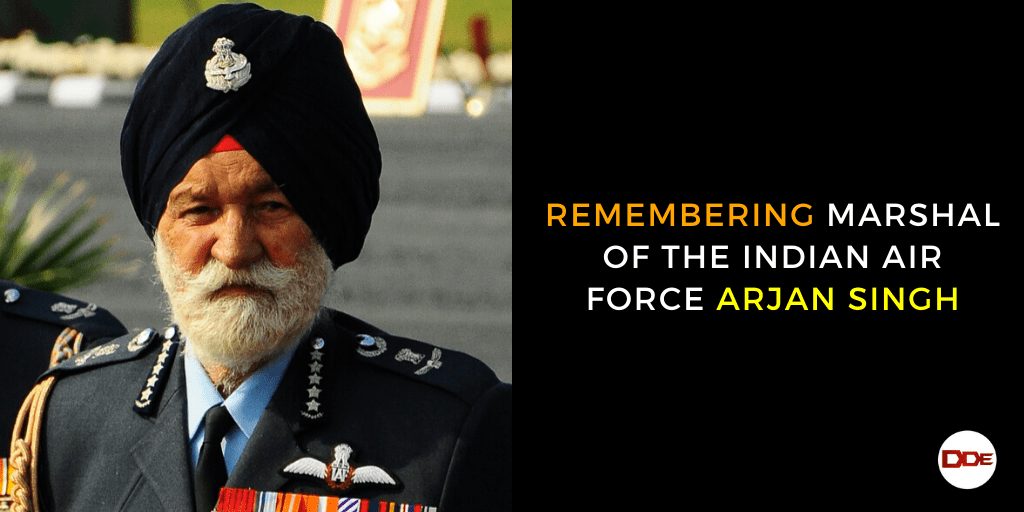 Let’s get inspired by a warrior, who was one of a kind: Marshal of the Air Force Arjan Singh. He was an Indian Air Force Marshal who served as Chief of the Air Staff from 1964 to 1969. He was born on 15 April 1919 in Lyallpur, Punjab (now known as Faisalabad, Pakistan) into a Sikh family.

Arjan Singh’s family had been among those which had settled there after being allotted agricultural land by the administration. Arjan Singh was the fourth generation of his family to join the British Indian armed forces. Arjan Singh entered the distinguished Royal Air Force College at Cranwell in 1938, at the age of 19, and graduated as a pilot officer the following year.

Flying officer who escaped a court-martial: Arjan Singh almost faced a court-martial in the year 1945, when he was just a flying officer when he tried to raise the moral of a trainee pilot by conducting a low-level air pass over a house in Kerala. When enquired, Singh to his defence said that such tricks were essential for every cadet to be a fighter pilot. In the year 1944, Arjan Singh led his squadron to Imphal against Japanese during the Arakan campaign, for which he received the

Distinguished Flying Cross (DFC) by Lord Mountbatten. On 15 th of August 1947, India’s Independence Day, Arjan Singh had the unique honour of leading the fly-past of more than a 100 air force aircraft over the Red Fort in Delhi. On 1 st of August 1964, Arjan Singh took over as the Chief of Air Staff in the rank of Air Marshal.

1965 war with Pakistan: Back in September 1965, Arjan Singh the then Chief of Air Staff was summoned to the Defence Minister’s office. Pakistan was targeting the vital town of Akhnoor in Jammu and Kashmir. The army needed air support. The government of India and the Indian army needed to know how quickly the Indian Air Force would be ready for operations. Airforce Chief Arjan Singh replied in his characteristic nonchalance, “…..in an hour”. Sixty minutes later, the Indian Air force was pounding Pakistan’s armoured formations. Led by a 45-year-old who had taken over just a year earlier, the air force struck the Pakistani offensive in an hour and also out-foxed Pakistan Air Force. Arjan Singh was awarded the Padma Vibhushan for his leadership of IAF during this war.