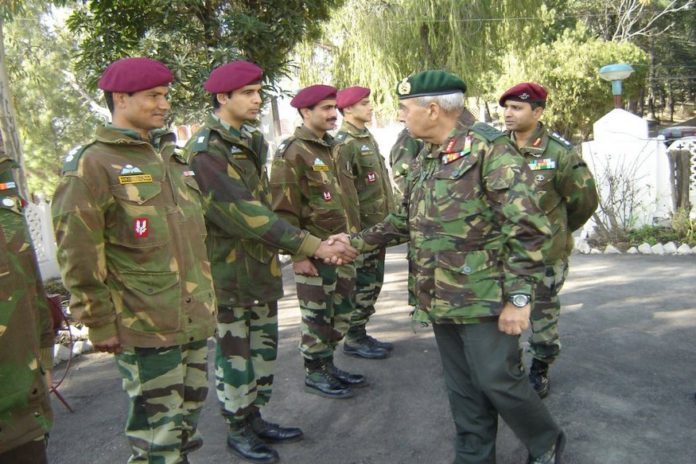 Major Mohit Sharma was born on 13 January 1978 in Rohtak, Haryana. He completed his schooling in DPS Ghaziabad. Later he went on joining Shri Sant Gajanan Maharaj College of Engineering, Maharashtra. But the destiny was already riveted. Maj Mohit Sharma left Engineering college and Joined the National Defence Academy Khadakwasla. He was an excellent horse rider and Boxer. After graduating from NDA, Mike Joined the Indian Military Academy Dehradun, he was Battalion Cadet Adjutant (BCA) in his term. On 11 December 1999, Mike was commissioned into the 5th Battalion of Madras Regiment.

Mike completed three years of Service in the Madras Regiment. But the urge to join Special Forces made him land in 1 Para SF. Mike served in Kashmir and showcased his leadership and skills. During his tenure, he was conferred with COAS Commendation Card and Sena Medal in 2005. Mike had his second tenure in Commando School Belgaum as an instructor for 2 years.

On 21st March 2009, Major Mohit Sharma, SM was leading Bravo Assault Team in operations in Kupwara District of North Kashmir. A valiant warrior, he excelled in the art of fighting guerrillas in jungle terrain having earlier spent four years in Jammu & Kashmir. On 21 March 2009, after receiving information of the presence of some infiltrating terrorists in dense Haphruda Forest, he planned meticulously and led his commandos in tracking them. On observing suspicious movement, he alerted his scouts but terrorists fired from three directions indiscriminately.

In the heavy exchange of fire, four commandos were wounded immediately. With complete disregard for his safety, he crawled and recovered two soldiers to safety. Unmindful of the overwhelming fire, he threw grenades and killed two terrorists but was shot in the chest. In the brief respite that followed, he kept directing his commandos, in spite of serious injuries. Sensing further danger to his comrades, he charged in daring close-quarter combat killing two more terrorists and attained martyrdom fighting for his motherland in the finest traditions of the Indian Army.

For this act of conspicuous gallantry, inspiring leadership, and exceptional courage far beyond the call of duty, Major Mohit Sharma, SM was awarded ‘Ashok Chakra’ (Posthumous)

Major Mohit Sharma covered his name as Iftikar Bhatt and grown a full beard to look like a Kashmir citizen. He was successful in infiltrating the Hizbul Mujahideen terror organisation. At that forces were in search of two dreaded Terrorists Abu Torara and Abu Sabzar. Maj Mohit Sharma aka Iftikar Bhatt established contact with them. He made them believe that he is really against the Indian forces and hoaxed them by making them believe that his brother was killed 3 years back by the Indian Army. Iftikar Bhatt had a detailed plan of Indian Army installations, Bases, Entry and Exit plan. Both terrorists were quite impressed with his level of planning and his anger against the Indian Army.

All three of them planned an attack on Army Installation. Days before the planned attack, Abu Torara raised doubts on Bhatt. Iftikar Bhatt threw his rifle on the floor and in the raised voice he told, “If you have doubt on me then kill me”. As Torara moved forward, Iftikar Bhatt aka Major Mohit Sharma took his 9mm pistol and killed both the wanted terrorists of Hizbul Mujahideen.

Also Read: Training of Para Special Forces Operatives – All You Need To Know