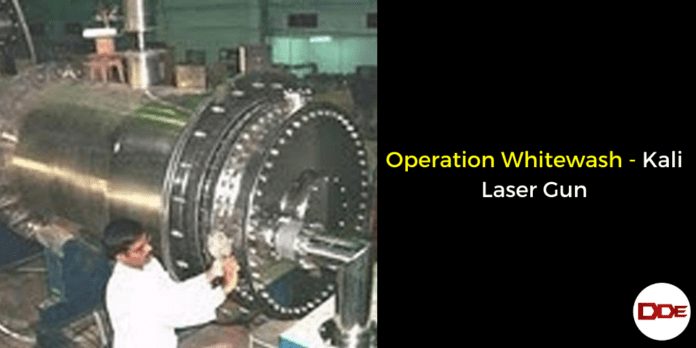 Operation Whitewash was a secret mission of RAW India. The DRDO developed the powerful Kali laser gun to create avalanches in the snow. India is always a peace loving Nation but whenever the danger occurred, it has always proved its mettle through heroic patriotism. The people of India are proud of winning 4 Indo Pak wars and the successful surgical strikes by Indian special forces and the mirages of Indian Air Force.

It all started in the year 2009 when the Jawahar tunnel in the Jammu and Kashmir was shut down due to the heavy snowfall. The BRO (Border Roads Organization) and DRDO LASTAC (Laser technology and development wing) were working to clear the tunnel from snow and make it operational. They were using the laser Gun looking like an Artillery cannon mounted on a truck.

In the scenes, a Senior Field officer from RAW  was witnessing the whole process. He came know that the laser Gun was known as Kali, used to create small avalanches in the snow and clear the tunnel. The RAW officer was astonished by seeing this kind of technology. The tons of ideas were striking his mind. He immediately went to Delhi and proposed the plan to his seniors. The plan was rejected and told him it is not possible at this point of time. But the RAW officer made the elaborated plan and again proposed it. By this time somehow he was able to convince the RAW chief. At that time the RAW chief was Sanjeev tripathi. The RAW chief looked at the plan and was a green signal from him. As the RAW chief and NSA (National security Advisor) M. K. Narayan were good friends and the plan was approved by NSA. The plan was taken to Prime minister of India Manmohan Singh and it was a go now.

RAW selected few ace people from DRDO (Defence Research and Development Organisation), SASE (Snow & Avalanche Study establishment, Chandigarh), Indian Army and Indian Airforce. The plan was to create an Avalanche on the Pakistani side of Siachen Glacier. The DRDO scientists started to develop more powerful Kali Laser Gun. The Kali Laser Gun cannot be taken at Siachen Glacier because the vibrations caused by it can harm people present in Indian side also. Then it was decided that operation will be done by Air platfrom. The two Russian origin IL 76 Military plane were taken on the deputation from the Indian Air force to ARC (Aviation Research Wing) of RAW and were stationed at Charbatia Airbase in Odisha. The more powerful KALI 50000W laser gun was fitted on the Planes and flew to the Sarsawa Airforce station and kept ready. By that time, the Scientists of DRDO and SASE identified the probable trigger points on the Snow patch of the Siachen glacier. The target was the headquarter of 6 Northern light Infantry of Pakistan Army.

On the D-Day, the IL 76 flew from the Sarsawa AFS and were escorted by the Sukhoi’s and Mirages. BARC (Baba Atomic Research Centre), Mumbai gave the timings of operation to conduct on early morning. The IL 76 Military plane reached the designated Coordinates at 30,000 feet and started shooting the laser beam with precision at the snow patch near the Pakistani side.

Huge Avalanche hit the Headquarters of 6 Northern Light Infantry . The Pakistanis were not having the time to react and were buried 80 feet under the snow. Nearly 120 people of Pakistan Army died on the spot. The whole scene was witnessed by Indian soldiers and Scientists present on the Indian side (i.e Indian post).

Operation Whitewash Kali Laser Gun was very successful mission of the RAW, DRDO, Indian Army and Indian Air Force. Salute to all those Scientists of DRDO and SASE who worked on this project day and night to make it successful. The most of the scientists of DRDO were from the south India but they under went training for the high altitudes and quickly acclimatized to the whether. All the Information is available in Public Domain and there is no breach of Security of Indian Armed Forces.