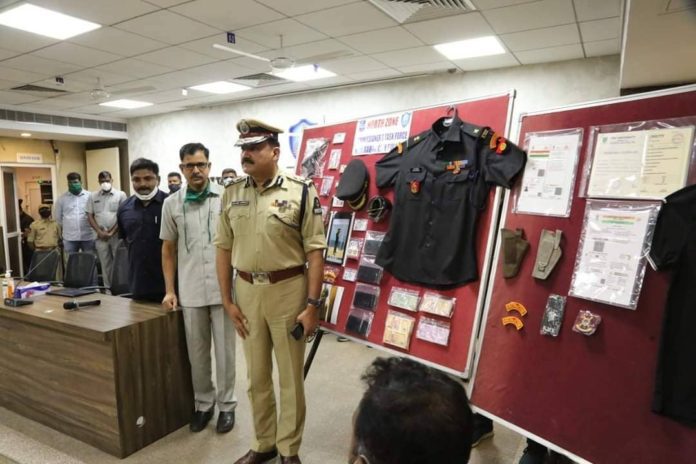 A fake army officer identified as Mudavath Srinu Naik duped 17 women by posing as an officer of Major rank in Indian Army. He collected Rs 6,61,02,000 from these women and their families as dowry by promising to marry them. He was arrested by Hyderabad police on 21st november 2020.

42-year-old Mudavath Srinu Naik is a resident of Sainikpuri area of Prakasham District of Andhra Pradesh. He studied upto 9th Class. He was impersonating himself as MAJOR of INDIAN ARMY.

He obtained an Aadhar card in the name of Srinivas Chowhan, with fake date of birth i.e 27-08-1986 (instead of 12-07-1979). He also obtained fake educational certificate of M Tech in Environmental Engineering from CMJ University in Meghalaya.

He informed to his family members that he got job as Major in Indian Army and they believed his words. He has a habit of maintaining luxurious life. To gain easy money illegally he impersonated himself as a Major working in Hyderabad and introduced himself as a graduate from National Defence Academy, Pune.

He had used the dowry money to buy a duplex house in Hyderabad and three cars, including a Mercedes Benz.

The Police has seized following items from M Srinu Naik:

The accused Mudavath Srinu Naik is born and brought up at Palukuralla Thanda, Kellampalli Village, Mundlamuru (Mandal), Prakasham Dist, AP State. In the year 2002 he got married with Amrutha Devi (Superintendent in DMHO, Guntur) and his son M. Nikhil Singh Chowhan is studying Intermediate 2nd Year. His family members now residing at Vinukonda, Guntur Dist, AP State. He is unemployed and migrated to Hyderabad in 2014 and settled at Sainikpuri, Jawahar Nagar.