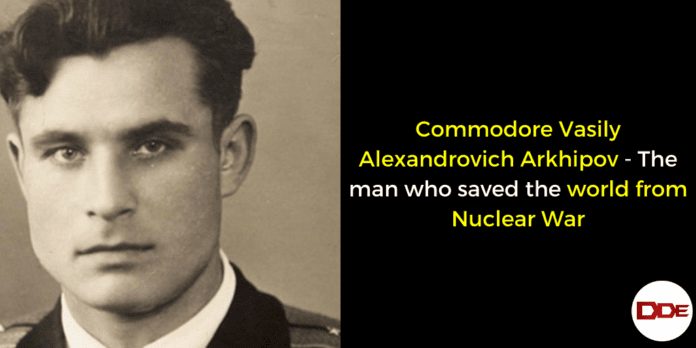 World War 3 is a really terrifying word to hear. The life of on earth will be erased within minutes. In the race on being the superpower nation, the nuclear stockpile is keeping on increasing. The hero we are talking about is Commodore Vasily Alexandrovich Arkhipov of Russian Navy. The Brave officer of Soviet Union Navy knew the consequences of Nuclear War might be very serious

After the World War 1 and World War 2, there was a phase of Cold War and Cuban Missile crisis. Everyone were aware about the fact that both USA and Soviet Union had deployed the Nuclear warhead Inter Continental Ballistic Missiles. In this era, the world witnessed many wars including the Vietnam war.

The B-59 Submarine Incident

During the Cuban missile Crisis, Commodore Vasily Alexandrovich Arkhipov was one of the officer in Charge of B-59 Diesel Submarine equipped with Nuclear Torpedos. On Oct 27, 1962, the group of US Navy Destroyers and Aircraft Carrier USS Randolph were present in the International Water near Cuba. The US Naval Ships detected the B-59 Submarine and started dropping the depth charges to force the submarine to come to the surface for Identification. The Submariners came to know the US Navy presence. As there was no contact with the Moscow, the Submariners of B-59 predicted that the war has broken out.

B-59 Submarine
Start Your Preperations

In the heat of moment, Captain of B-59 Valentin Grigorievitch Savitsky and Political Officer Executive officer of B-59 Commodore Ivan Semonovich Maslennikov decided to launch the Nuclear Torpedo towards US Naval Ships. To launch the Torpedo, permission from the all three Officers i.e Captain of B-59, Exo officer Ivan and Commodore Arkhipov was required. But the Commodore Arkhipov was against the Launching the Torpedo as he was not clear about the War has broken out. The Submarine’s batteries were low and the air conditioning had failed, causing the extreme heat and high levels of Carbon Dioxide in the Submarine. Still after many arguments Commodore Arkhipov was against the launching the torpedoes’. Commodore Arkiphov insisted to Surface the Submarine and wait for the orders from Moscow. The war was not broken out. After Surfacing, the Submarine was Identified and returned to Soviet Union.