What is QRSAM Missile – All You Need To Know 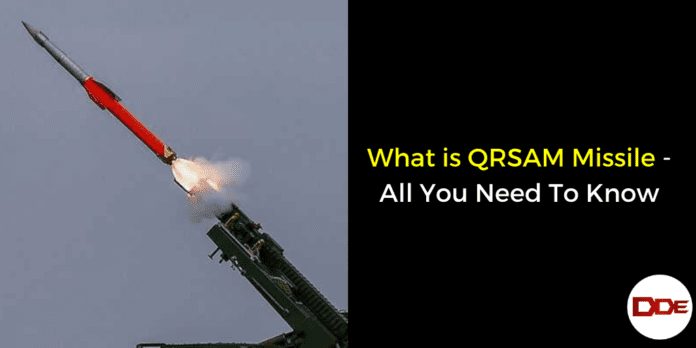 What is QRSAM Missile – All You Need To Know

QRSAM Missile is acronym of Quick Reaction Surface to Air Missile. It is jointly developed by QRSAM Missile DRDO (Defence Research and Development Organisation), Bharat Electronics Limited (BEL) and Bharat Dynamics Limited (BDL). The QRSAM Missile make use of solid fuel Propellent with the all weather range operating capability. The Range of Missile is 30 KM. The Missile is fitted out with Electronic Counter Measures to avoid the Jamming from enemy fighters. The XRSAM Missile is Also being developed (Extended Range).

Development and Testing of QRSAM

To examine the Guidance and Aerodynamics of Missile, DRDO conducted nearly 10 missile test firing. In June & July of 2017,First and second test fire of QRSAM missile took place at Chandipur Missile Range off the coast Odisha . In the same year, the missile was test fired again on December 22, 2017. Followed by the subsequent test fires, DRDO tested the Missile with live warhead and a direct hit on a pilot less target Aircraft. This test was conducted recently on 13th & 17th November 2020. The Missile can be mounted on Transport Launchers and Heavy Mobility Vehicles.

In the further development, DRDO is also developing the Extended Range Surface to Air Missile (XRSAM Missile). Along with QRSAM, Induction of S-400, Akash Missile and Israeli Spyder Missile will give an edge over the Adversaries Aircrafts. Apart from S-400, all the three missiles are currently deployed at Ladakh.