INS Sindhuvir is set to serve in Myanmar Navy 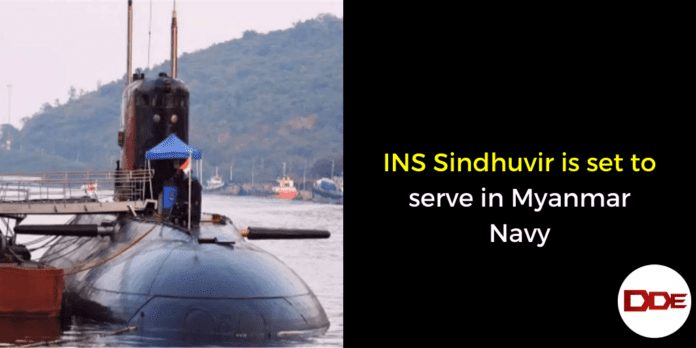 INS Sindhuvir is set to serve in Myanmar Navy

India delivers the refitted Kilo class Diesel Electric Submarine INS Sindhuvir to Myanmar Navy. The old design submarine has underwent the extensive refitting at Hindustan Shipyard Limited. Strengthening the relations with Myanmar, Indian counterparts stated that in accordance to SAGAR – Security and Growth for All in the Region, the submarine is delivered.

INS Sindhuvir was commissioned into Indian Navy on 26 August 1988. The Kilo Class Submarine Served in Indian Navy for 29 years. The Submarine has an Endurance of 45 days with speed of 10 knots (Surfaced) and 17 knots ( Submerged). The submarine is loaded with Surface to Air Missiles, Torpedoes’ and Underwater Mines. The Ship was refitted at Hindustan Shipyard Limited to extend its service life and was delivered to Myanmar Navy.

The relations with Myanmar

Myanmar shares its International boundary with four Indian states i.e Arunachal Pradesh, Nagaland, Mizoram and Manipur. India is the 4the largest trader for the Myanmar. The Border Roads Organization built Tamu-Kalewa-Kalemyo highway in 2001 which is known as Indo-Myanmar Friendship Road. SAGAR – Security and Growth for All in the Region is also initiative of India.

Also Read : INS Khanderi – All You Need To Know