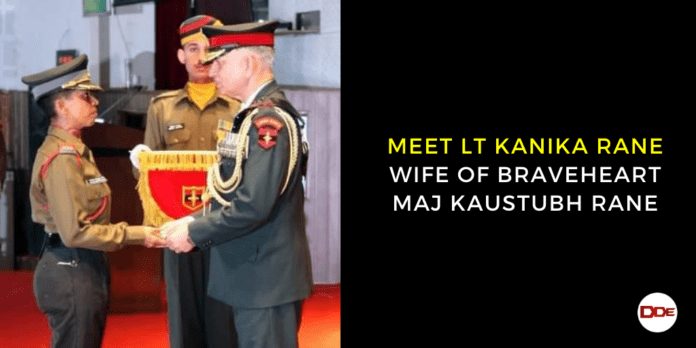 Meet Lt Kanika Rane Wife Of Braveheart Maj Kaustubh Rane. Two years after her husband Major Kaustubh Rane martyred in Kashmir, Kanika Kaustubh Rane paid him a fitting tribute. On Saturday, she was commissioned into the Indian Army after completion of her training at the Indian Army’s Officers Training Academy in Chennai.

The 29-year-old Major Rane was martyred during an operation in Kashmir in August 2018 with three other Indian soldiers — rifleman Hameer Singh (28), rifleman Mandeep Singh (26) and Vikramjeet Singh (25). The soldiers had laid down their lives in an attempt to foil an infiltration bid near the Line of Control near Gurez Sector in Bandipora district, about 125 km from Srinagar.

In a video shared by Journalist Shiv Aroor on Saturday, Lieutenant Kanika Rane said, “I would not say it was an easy choice…But I knew that had our places been switched, he would have also done the same for me. I am here to fulfill his objectives and the dreams he has left behind by being in his place.”

Speaking on the training, Kanika Rane said that it requires more mental strength than physical endurance. “If you have mental strength and stamina, you can overcome anything. I had never even run 100 metres before coming here, and now I am running 40 km” she said.

Major Kaustubh Rane, who was first inducted into Garhwal Rifles, was then transferred to 36 Rashtriya Rifles. Major Rane had completed six years of service in the Army. He is survived by his parents, his wife Kanika and their young son Agastya.

Last year, at an investiture ceremony held earlier this year in Udhampur, Kanika had collected a gallantry award on behalf of her husband.

Kanika, who earlier worked as a project manager in an MNC, cleared the Service Selection Board (SSB) exam last year. In October 2019, she went to the Officers Training Academy (OTA) in Chennai for her 49-week course.

On Saturday, two hundred and thirty officer cadets – 181 men and 49 women, passed out from the Officers Training Academy in Chennai.