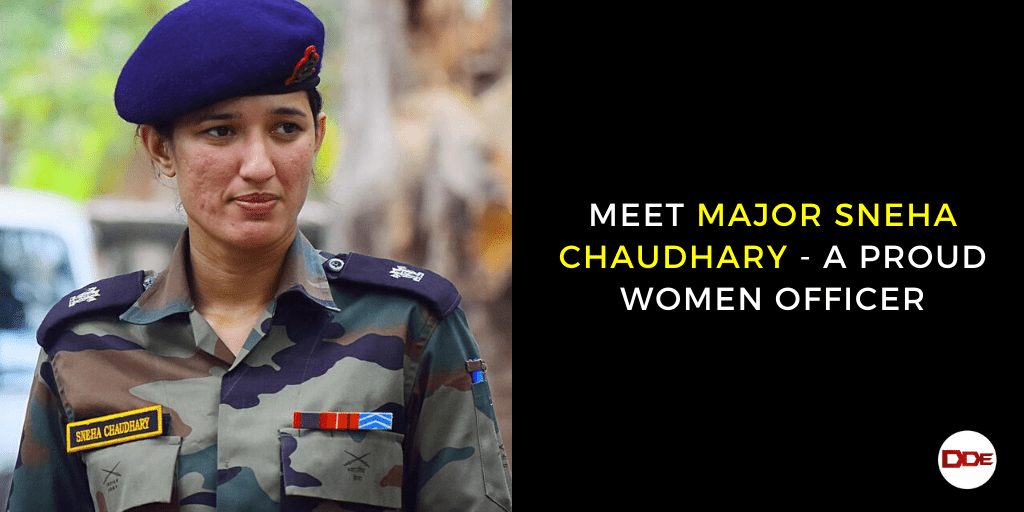 Major Sneha Chaudhary passed out from the prestigious Officer’s Training Academy in 2014. Daughter of an airmen, she is the first generation officer from her family. Coming from a defence family, she had always dreamt of fatigues, and had never had a back-up career plan. “I wanted to become a pilot, but since I had crossed the age limit by the time I could apply, I chose the Army and I have no regrets. When I was a child, I would wear my father’s uniform and walk around at home, now I have my own and never want to part with it,” she said with pride.  She had worked with a civil organisation for around eight months, and was not happy, so she joined the Army in 2014.

Currently posted in the Madras Sappers MEG and Centre in Bengaluru, Chaudhary takes us to her favourite flashback with a smile. “Coincidentally, I have now been commissioned to MEG & Centre in Ulsoor in the city where I began my schooling. Although I travelled across the country later in accordance with my father’s posting to study in different Kendriya Vidyalayas, this one has always been special,” she said.

For Major Sneha Choudhary, the defence uniform denotes discipline, equality and respect. No gender discrimination, she says pointedly. “All are equal and you just have to prove yourself to get respect.”

“We have been given a chance to sacrifice ourselves for the nation. The set of ethics, morals, and ethos that has been laid down by the armed forces has become an integral part of my life.”

A qualified mechanical engineer who graduated from ITS Engineering College in Greater Noida, got her first posting in 2014 at Akhnoor in Jammu as a platoon commander. “Being posted near the Line of Control (where India shares a boundary with Pakistan) was a great experience. Getting to see, live and work at the border, which I had only seen in movies till then was really empowering and encouraging,” she said.

Maj Sneha has also served as an Assistant Garrison Engineer in Yol, situated southwest of Dharamshala in Himachal Pradesh before she was posted to MEG Centre Bengaluru.

She is also known for being a fervent basketball player, having represented her home state Rajasthan at the national level.

“While my priority remains serving the nation in whatever capacity I am directed to, serving as the Lieutenant-General in the Indian Army is something that I look up to,” she says, referring to the recent posting of Major General Madhuri Kanitkar, who was recently elevated to the rank of Lieutenant-General.

She urged the youth, especially women, to join any of the forces. “Give yourself a chance to serve the nation. You get it only once, as there is an age limit. All youngsters should try.”

The officer, who was in the team that took part in rescue operations at flood-hit Belagavi during August 2019, emphasises that life is equally challenging for both men and women in the Army.

Accordign to Major Sneha “Lady officers have been given equal opportunity to be on field even in border areas and to take part in various operations. While we are entrusted with similar responsibilities as our male counterparts, providing the best service becomes the top priority at an individual level and at the team level cutting across gender.”

Major Chaudhary was also effusive in her praise for the recent Supreme Court order that brought women officers in 10 streams of the Army on par with their male counterparts in all respects. “It is a giant leap towards gender equality and we are ready to face any challenges coming forward promptly,” she said.

While Maj Chaudhary has her father MWO Narendra Pal Singh serving in Indian Air Force, her husband Captain Suyash Malik is serving in the Indian Army and is currently posted at ASC Centre And College, Bangalore..