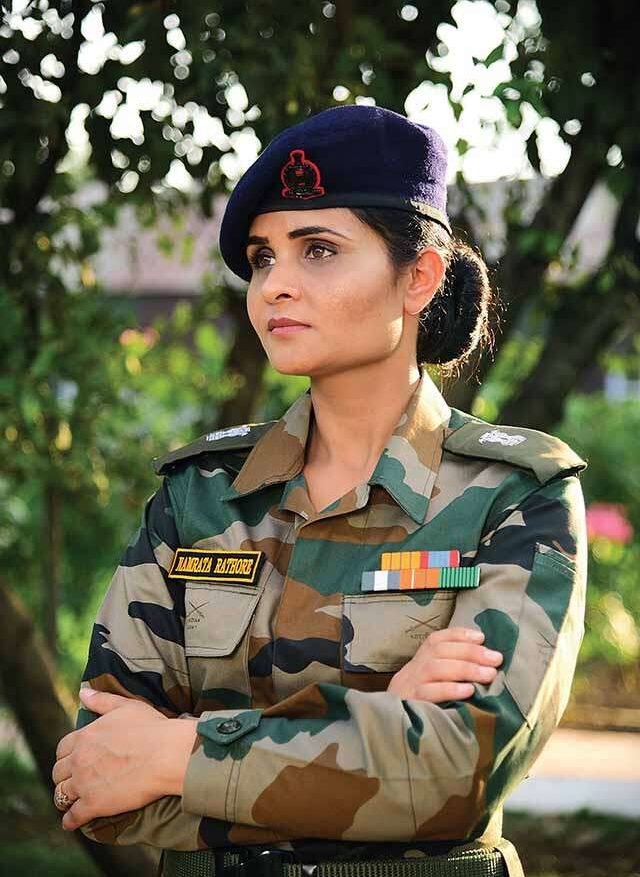 Major Namrata Rathore, VSM hails from the beautiful valley of Dehradun. Born in September 1986, she grew up with the love and affection of her parents and three sisters, in a childhood she recalls as an “amazing experience”. She joined the army in 2007, and has been awarded the Vishisht Seva Medal as part of the Army’s women mountaineering team that scaled Mount Everest in 2012.

What motivated you to join the Army?

My school, Kendriya Vidyalaya at the Forest Research Institute, was next to the Indian Military Academy, and was motivated watching the young and smart gentlemen cadets (GCs) cycling, running and passing by our school every single day. I still fondly remember halting on one side of the road while moving from our school’s junior section to the senior, and saluting the fleet of GCs passing on the road; I did it every time to honour the service to the nation that they were so fortunately destined to render. It had a charm in itself that motivated me to strive to become a part of the same organisation one day. I can never forget September 22, 2007 – the date my dream came true; my parents put the stars on my shoulders, and I became a part of the Indian Army.

What have been your greatest learnings in the armed forces?

The Indian Army teaches you a very important lesson – to lead and command your men in an effective and successful manner so that they stay motivated and keep on going even under the most extreme field conditions. Having led, I can say with conviction that leadership is not about gender. It is more about the trust and faith your team has in you, so that they can follow your lead even in the toughest of situations on account of their faith and trust in your skills and mental abilities. I have also learnt that it is imperative to set a good example for your colleagues and soldiers, so that the team can collectively cultivate a positive environment. They can also learn the same from you by example and further implement it in their teams and lives.

As officers of the Indian Army, it is our responsibility to take care of our men and their families. If they live in harsh and sometimes life-threatening conditions and perform all their tasks willingly at our orders and by our sides, they and their kin must be looked after properly.

What is a typical day like for you in the Army?

A typical day for me starts with the physical training parade at 6.15 am, where the complete regiment practises its regular physical fitness routine. Then, I get ready for the office, and wake my two-year-old kid, so that I can get a great goodbye kiss from my little champ.

I am from the Corps of Engineers where, as Adjutant, the day starts with getting the interviews of the regiment soldiers done from the Commanding Officer. I then perform routine activities that include handling the training, operational and administrative aspects of the regiment. One of the most important duties of being the Adjutant is to maintain discipline, which means being strict. Being in the field, it is imperative that we are active 24/7, therefore evenings are spent in checking on the security of our area of responsibility, general discipline of the regiment, and taking all okay reports of our teams and our regiment.

My day ends with my little prince, seeing his wonderful activities, and putting him to sleep with a hug.

Why do you believe the Army has been a perfect fit for you?

A ‘perfect fit’ job is one that allows you to reach your goals and discover new ones. It helps you grow both as a professional and a person, and allows you to interact with others who inspire you. Above all, a perfect-fit job lets you walk away from the work day feeling fulfilled and accomplished. I think the Indian Army gives me all this in every possible way. I am an adventurous person who loves to be challenged, and the Indian Army keeps that spirit active, be it in work or sports.

What does the word freedom mean to you?

Freedom, according to Tagore, has a spiritual root. It includes freedom of expression and freedom of conscience. The poem Freedom by the great Nobel laureate was a cry for the country’s independence, which, he believed, could be accomplished through an intellectual awakening. This thought has had a great impression on me since childhood, and I am very strongly of the view that it is a paramount responsibility of each and every one in the nation to intellectually and physically pursue and challenge existing limits in all fields across the humanities, sciences, commerce, and sports to feel the real sense of freedom. This, I believe, goes way beyond just unfurling flags and singing patriotic songs on a specific day of the year.

What is your message to women considering joining the Army?

The Indian Army is the most professional army in the world and it is a great honour and pride to be a part of it. Historically, in India, women have always proved their mettle, be it Rani Laxmi Bai of Jhansi or Begum Hazrat Mahal of the erstwhile Awadh. Women have proved their mettle since the commissioning of Priya Jhingan in the first batch of women officers of the Indian Army.

in March 1993, and, since then, they have performed as well as their male counterparts. Now, with the decision in favour of the permanent commission for women officers in the Indian Army, it has become an even more wonderful platform for Indian women to contribute in a greater and more efficient manner towards nation-building and defence.

What would be your message to inspire women across the country?

There is no limit in the world that can hold you back from achieving your dreams. Just spread your wings, stay focused and dedicated, keep working hard in a disciplined manner, and fly until you achieve your aim. There will be many impediments in your way, but the question is whether they are good enough to hold you back.

Selection Board For Grant Of PC To Women...