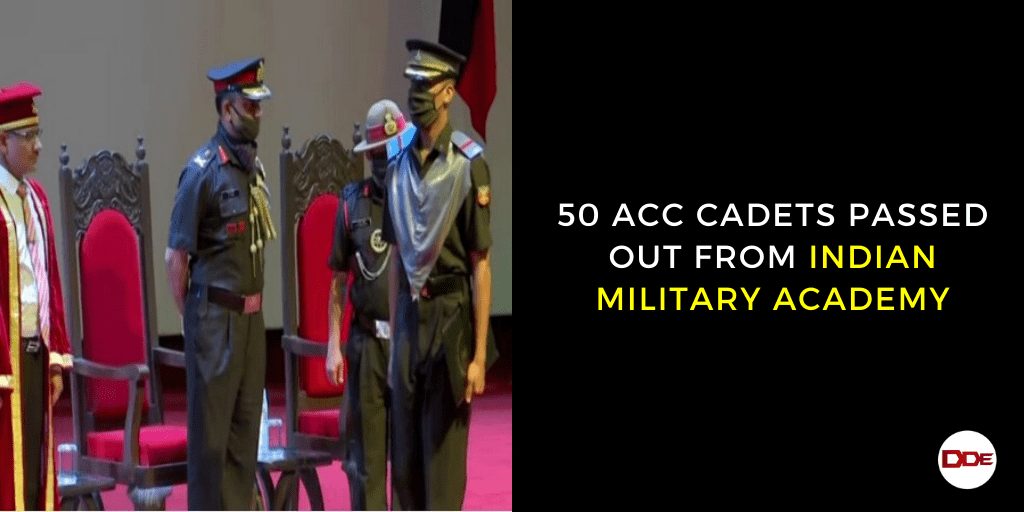 The graduation ceremony of 50 cadets of Army Cadet College (ACC) Wing was held at the Indian Military Academy (IMA) on Friday.

The degrees were conferred on the ACC cadets by Jawaharlal Nehru University (JNU), New Delhi. As many as 31 cadets graduated in Humanities while the remaining 19 passed Science stream.

ACC is a wing of the Indian Military Accademy and after completing three years at the ACC, the cadets undergo one year of training at the IMA.

The ceremony was presided over by Lieutenant General (Lt Gen) Jaiveer Singh Negi, Commandant IMA. In his convocation address, Lt Gen Negi congratulated the cadets for successfully completing their challenging three years of training at the ACC Wing. He also awarded the Commandant’s Banner to the Champion Kargil Company of Army Cadet College. The Kargil Company has won the honour fifth time in a row now. The Banner is awarded to a Company which excels in various competitions like Sports, Academics, Camps, Debates, and Interior Economy.

Commandant’s Silver Medals were given to Arvind Bagoria in service subjects as well as in Humanities stream. The first position in Science stream was secured by wing cadet quarter Pawittarpal Singh.

The commandant complimented Brigadier VM Chaudhari, commander, Army Cadet College Wing, his team of instructors, and Faculty Members for their diligent efforts in shaping the cadets into potential officers. He also congratulated parents and spouses of the cadets who could not participate in this ceremony in the wake of Covid-19 outbreak.