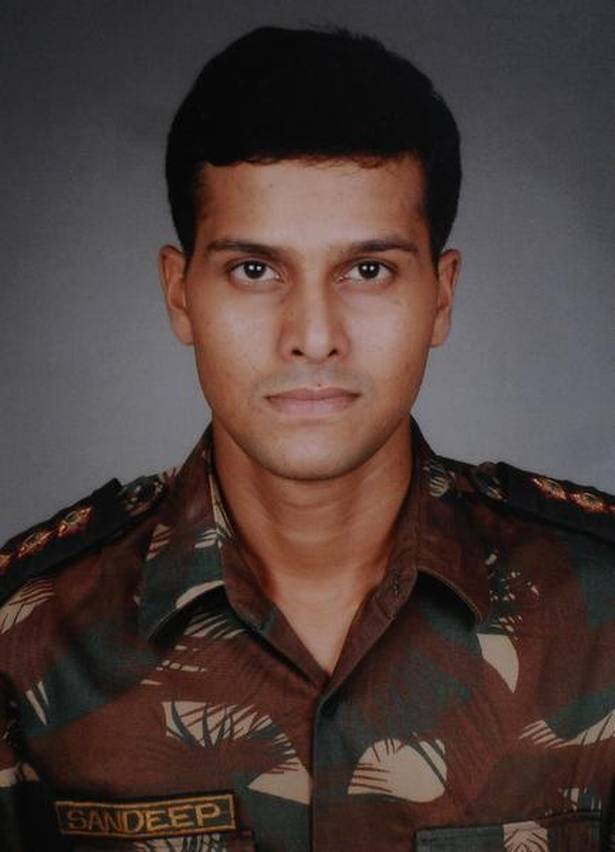 Maj. Sandeep Unnikrishnan was an officer of the Indian Army who had served in the elite Special Action Group of the National security Guards. He was martyred on 28th November 2008, during the Operation Black Tornado (the 26/11 Mumbai terror attacks).

For his bravery and sacrifice of his life for the country he has been decorated with Ashoka Chakra (highest peace time gallantry honor) on 26th January 2009 posthumously.

He hail from Bangalore but moved to Kozhikode Kerala from where he got his education. His father is a retired ISRO officer K.Unnikrishnan and mother Dhanlaxmi Unnikrishnan. He was the only son of his parents. As a young boy his teacher always remembered him as a good all-rounder who manages his time for academics as well as for school activities and sports.

After his school education he joined the prestigious National Defence Academy, Khadakvasla. He was a part of the Oscar Squadron of NDA and he had graduated from the 94th course of the NDA. His course mates still remember him for his calm nature and generosity. He was also remembered for being a very selfless person who was always ready to help his mates without caring about the risks involved and the difficulty of the task.

He was commissioned as a Lieutenant to the 7th battalion of the Bihar Regiment from the Indian Military Academy on 12th July 1999. After  few years of service he was selected for the elite National Security Guards (one of the country’s most elite force to counter terrorism). On completion of the course of the NSG he was assigned to the Special Action Group (51 SAG), he had also topped the course at Infantry School Belgaum.

Maj. Sandeep Unnikrishnan had also been a part of Operation Vijay 1999, where he had been posted to a forward post under continuous heavy artillery fire. His role in this operation had been regarded as highly positive.

During the 26/11 attacks when the Maharashtra police fail to have control over the terrorist attacks due to heavy casualties of superior officers and other ranks mainly at The Taj Hotel, Nariman House and Oberoi Trident. The responsibilities to neutralize the terrorists and evacuate hostages have been assigned to the 51 Special Action Group and 52 Special Action Group.

The 51 Special Action Group of which Maj. Unnikrishnan was a part of, entered the Taj Hotel in a group of 10 commandoes, as the team reached the 6th floor they get suspicious of having terrorists on the 3rd floor with few women as their hostages. When Maj. Unnikrishnan and his buddy came into rescue, his buddy got hit. In that situation Maj. Unnikrishnan with his calm managed his buddy’s evacuation and saved his life.

In this encounter that ensued Maj. Sandeep Unnikrishnan chase the terrorist in a fire fight. But unaware of the fact he was surrounded by terrorist from front and rear, and was ambushed in the staircase and was fatally hit on the back and neck, but inspite of the fact he was badly hit and in order to protect his other team. He gave them the order not to come up and he will handle them and continued to charge the terrorist till he succumbed to his injuries

Major Sandeep Unnikrishnan displayed most conspicuous valor besides camaraderie and leadership of the highest order and made the supreme sacrifice for the nation. There is a lot of things a candidates could learn from this hero of ours and lest not forget our hero’s sacrifice.

Don’t Come up, i’ll handle them

These were the departing words and the last orders of the brave Maj. Sandeep Unnikrishnan to his subordinates.

11 Facts About NSG Commandos That Will Make...