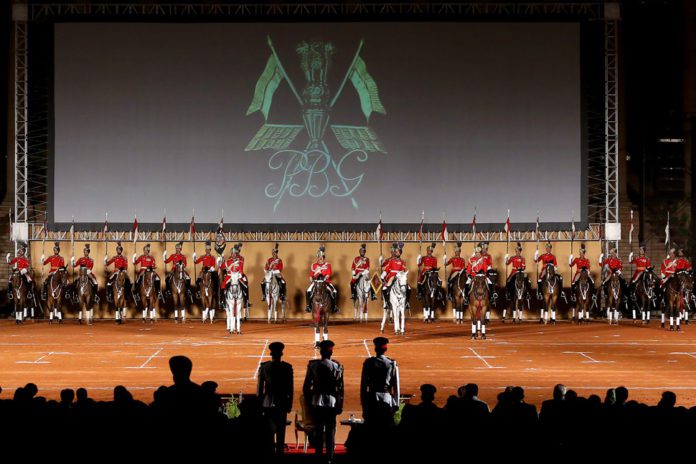 President Droupadi Murmu presented the Silver Trumpet and Trumpet Banner to the President’s Bodyguard in a ceremony on October 27.

The President’s Bodyguard (PBG), as it is known today, was raised in 1773 at Benares by the then Governor General, Warren Hastings, with a strength of 50 handpicked troopers. This unique body of selected troops, in over two centuries of dedicated service, has played various roles as mounted and dismounted cavalry and more recently as mechanized and airborne troops. The President’s Bodyguard has completed two hundred and forty two years of distinguished service. It is the senior most unit of the Indian Army, whose distinction, is its position as ‘Right of the Line’ on all official and ceremonial occasions. The PBG thus, takes precedence over all other Regiments and Corps of the Indian Army.

The cavalryman’s life is woven around the calls of the trumpet giving it pride of place in unit traditions and ethos. The prestige of the unit is further enhanced by the trumpet banner it carries. The PBG has the unique distinction of being the only military unit of the Indian Army, privileged to carry the President’s Silver Trumpet and Trumpet Banner.

Every President has continued the practice of honouring the regiment. Rather than a coat of arms, as was the practice in the colonial era, the monogram of the President appears on the Banner.

The ceremony begins with the Regiment falling ‘On Parade’, with the troopers in their impressive ceremonial attire mounted on their splendid steeds. On arrival, the President inspects the Bodyguards. Subsequently the Parade forms a ‘Hollow Square’ and the President presents the Silver Trumpet with the Banner to the Trumpet Major.

Dr Rajendra Prasad, the first President of India, presented the Silver Trumpet and Trumpet Banner to the President’s Bodyguard on May 14, 1957.