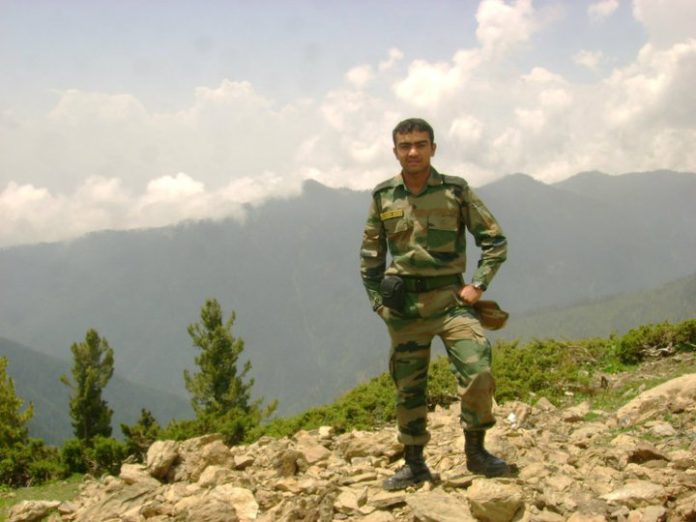 Lt Navdeep Singh, Ashok Chakra was a young officer from Army Ordnance Corps, he was posted to the 15 Maratha Light Infantry as part of a three-year mandatory service.

The 15 Maratha Light Infantry was deployed in the Gurez Sector near the Kishanganga river.

Early Life
Lt Navdeep Singh hailed from Gurdaspur, Punjab. His father is a retired Subedar Major, an Honorary Lieutenant from the Indian Army Corps of Engineers. He completed his degree in Hotel Management and pursued MBA thereafter. The Youngblood joined the Officers Training Academy, Chennai and was commissioned into the Army Ordnance Corps in March 2011.

Battle School Course
In mid-2011, Lt Navdeep Singh entered 15 Corps Battle School in Khrew, Jammu and Kashmir for Pre-induction training in the Kashmir Valley. The School curriculum is designed to train officers and soldiers of the Indian Army to operate in high- Altitude Counter-Insurgency and Counter-Terrorism operations. Seeing the level of Motivation, the CO of the 15 Maratha Light Infantry, Col Girish attached Lt Navdeep Singh to the Ghatak Platoon. During the competitions held at Khrew, Navdeep’s Ghatak Platoon emerged as the victorious one.

A bunch of terrorists were crossing the Kishanganga river to infiltrate Kashmir. The Surveillance teams of 15 Maratha Light Infantry spotted the terrorists, the infiltrators were using the inflating boats to cross the stream. Immediately the message was passed to Rana (operational Headquarters of 15 MLI). Sensing the number of terrorists, Col Girish sent more ambush teams to the site, with one team led by Lt Navdeep Singh and another team led by Naib Subedar Mengare Shankar Ganapati. And it was made clear that “No fire” until all the infiltrators are within the 100% kill range, hence both the teams positioned themselves in sangar near the Nallah (stream).

Lt. Navdeep Singh was with his buddy Sepoy Vijay. Displaying the utmost leadership, Young Officer clearly passed the message that “No firing” until the infiltrated terrorists were within 5-10 metres of firing range ensuring maximum kills.

When the terrorists were within 5 metres, Lt Navdeep Singh ordered them to open fire, instantly killing 8 out of 9 terrorists. The other terrorist was injured and took cover behind the small boulders. The team of Naib Subedar Mengare Shankar Ganapati couldn’t engage the other terrorist because of the boulders, and the team of Lt Navdeep was furiously fighting with the remaining one. The terrorist lobbed the grenade onto Lt Navdeep’s position, injuring his buddy Sepoy Vijay. The officer dragged him to a safer position and continued firing.

To take a look at whether the terrorist changed his position, the volley of fire came towards Lt Navdeep and hit his patka and went straight through his head. At this moment Lt Navdeep squeezed his AK-47 trigger and killed the terrorist. Lt Navdeep Singh attained martyrdom in the Gurez Sector.

Just days after this operation, another terrorist was killed by Havaldar Zore Bapu Bhagoji. The infiltrator belonged to the same group of terrorists.

After this successful operation,

We all will remember you, Lt Navdeep Singh.

Share
Facebook
Twitter
WhatsApp
Telegram
Previous article
What Is Silver Trumpet And Trumpet Banner?
Next article
Meet The Young Officers Who Passed Out From OTA Chennai