Meet The Young Officers Who Passed Out From OTA Chennai 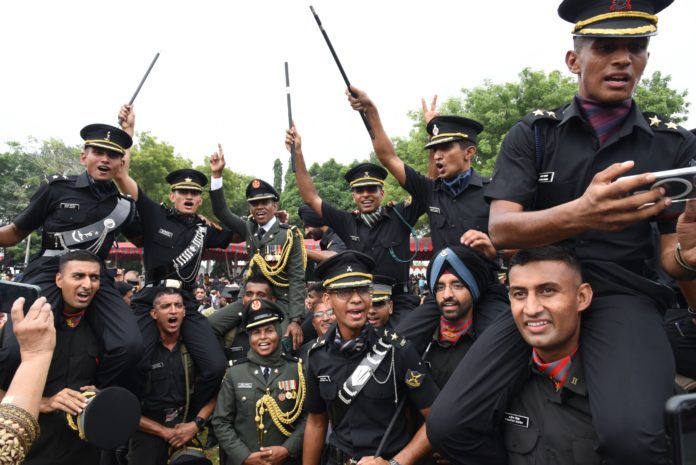 In a ceremonial passing out parade at the Officers Training Academy (OTA) Chennai on Saturday as many as 159 men and 63 women cadets commissioned as officers in various arms and services of the Indian Army. Two widows of fallen soldiers were also among the cadets who passed out the parade.

For Harveen Kaur Kahlon, 28, from Punjab, life took an unexpected turn three years ago. She was a Chemistry teacher in an international school in the state. Never did she imagine she would be joining the OTA, separated from her child, pass out of the academy and serve the country. When she was five months pregnant, her husband who was serving in the artillery division died in June 2019, of cardiac arrest. He did not see his son. “When I cleared the exam and wore the uniform, I remembered my husband. My parents and in-laws were supportive as ever. The time away from my son, in the academy, was hard,” said Kaur Kahlon.

Similarly, Rigzin Chorol, 32, who had passed out of the academy, was glued to her son. “We have been far from each other for so long that surviving the harsh and rigorous training seemed less hard. When the helicopters showered flowers, I believed my husband would be proud of me,” said Chorol, the first woman army officer from Ladakh. Her husband Rigzin Khandap died of cardiac arrest when her son was four-months-old. He was serving in the Ladakh Scout third Battalion. Lt Rigzin became the first woman from Ladakh to join the Indian Army as an officer.

Sisters In The Academy :

While Shivani Tiwari, 23, finished her course in the OTA and passed out of the academy, her younger sister Sumedha Tiwari, is in the same academy in the junior year. They are the fourth generation in their family to wear a defence uniform. Their father is serving in the Navy.

For Sonam Yangchen, a 23-year-old science graduate from Bhutan one of the first challenges was to survive the weather conditions in Chennai. Yangchen followed the path of her father, a retired army officer of the Royal Bhutan Army. She joined the Officers Training Academy in December last year. “Initially, the weather was unbearable, but with more passing days I adapted. The training helped me understand what lies ahead of me,” said Yangchen. She is one of the 30 cadets from Bhutan who will now return to join as Lieutenants in the Royal Bhutan Army.