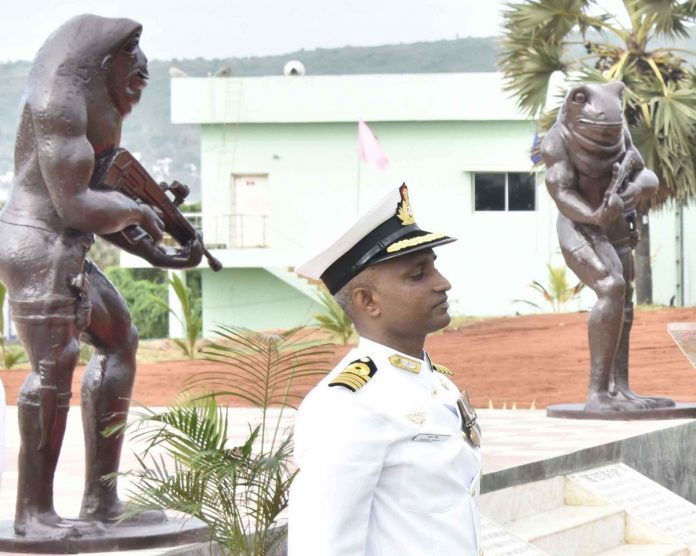 21 years back, Capt Varun Singh as a young officer of the Indian Navy was posted with a Marcos detachment in the Wular Lake area in Kashmir. The unit consisted of highly trained marine commandos to operate in such areas. The Marcos were deployed in the area to block the infiltration from the Wular Lake.

In May 2000, a group of three terrorists of Al Badr terror organisation were located in nearby Puttushahi Village near Bandipora. Lt. Varun Singh was deployed elsewhere but the duty and courage made him ask his commanding officer to get deployed himself in Puttushahi Village. The terrorists were hiding in a big house. Lt. Varun and his buddy sneaked into another building and threw a grenade into the first and second floor. As there was no observable response from another side, the team decided to blow up the building by RDX. As Lt. Varun Singh was a demolition expert, he calibrated the device and the other member of the team threw it into the building.

The building collapsed quickly and the body of one terrorist was recovered which was hanging at the back of the building. But there was no clue of the other two terrorists. The area was quickly cordoned off and sanitized. The team of Lt Varun Singh jumped a 5-foot wall of the same building along with Army jawans deployed in the operation. As one of the Jawan tried sneaking into the Cowshed, the burst of bullets resumed. Everyone member tried to take cover behind the same 5 – foot wall but two soldiers along with Lt Varun Singh stayed inside and assessed the situation.

Then the two terrorists started firing at the jawans who were trying to take cover. The Terrorists were in the sight of the fire of Varun Singh at a range of five meters away. The Young Officer Lt Varun opened fire at two terrorists, as they both fell off, one terrorist had his finger on the trigger and he fired a round at Varun, later the other terrorist collapsed.

The Bullet of the terrorist hit the grenade on the right side of Varun’s Chest. Although it didn’t explode instead it splintered and tore the chest of Varun Singh. The Young Officer was not able to sense his Right hand. Quickly the officer was evacuated to the base hospital Srinagar. The doctors said there is no chance of living he had to give up.

But their is a saying that “Fortune favours the Brave”.

Lt Varun Singh was operated on to remove the splinters from his heart, operated on his lungs and bones. The Right hand of Lt Varun was paralysed and he nearly spent two years at a hospital for rehabilitation. But there are still more than 75 splinters embedded in the right chest of Capt Varun Singh.

For his exceptional courage, duty towards the motherland and bravery of his leadership, Young Lt Varun Singh was awarded Shaurya Chakra in 2001.

Also read: MARCOS aka Marine Commandos – All You Need To Know