Operations Of Indian Navy That Will Fill You With Pride 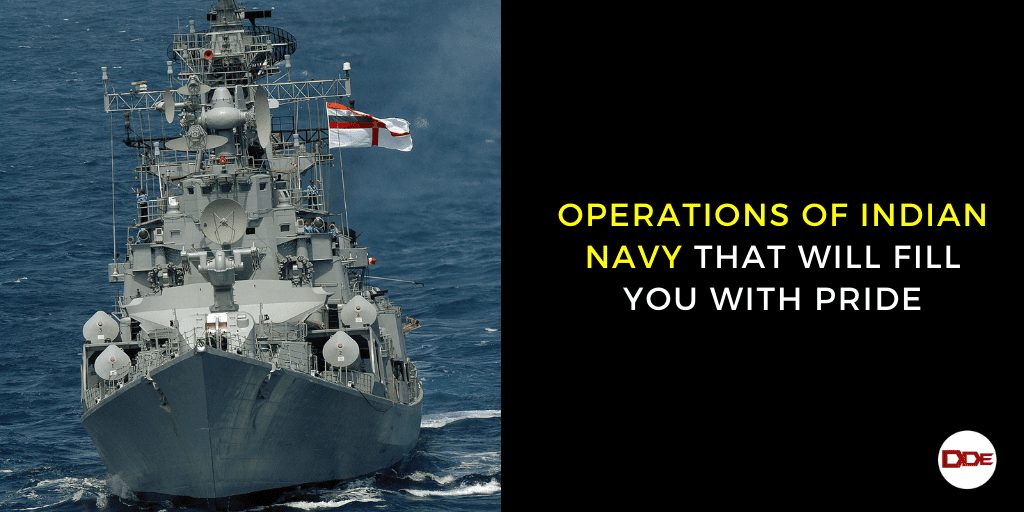 Operations Of Indian Navy That Will Fill You With Pride

Operations Of Indian Navy That Will Fill You With Pride. Every year, India celebrates Navy Day on December 4 as a tribute to the courage and determination made by the Indian Navy during the 1971 war. Operation Trident was an offensive operation launched by the Indian Navy on Pakistan’s port city of Karachi during the Indo-Pakistani War of 1971. Operation Trident saw the first use of anti-ship missiles in combat in the region.

Three Indian Navy missile boats – INS Nirghat, INS Veer and INS Nipat – played an important role in the operation. The operation was carried for 90 minutes, which resulted in the firing of six missiles by Indian Navy that destroyed four enemy vessels including a cargo ship that was loaded with ammunition and killed 500 Pakistani Navy personnel. The operation was successful without a single Indian casualty. Since then to commemorate the day, December 4 is celebrated as the Indian Navy Day.

Operation Raahat was conducted during the Yemeni Crisis in 2015 to evacuate Indian citizens and foreign nationals from Yemen. The Indian Navy, Indian Air Force, and Air India pooled in resources to begin the operation. As the rift raged between the Houthi rebels and the Yemen government supported by aerial bombardment, the Indian government issued a notice asking Indians in Yemen to leave the country. The evacuation by sea started on 1 April 2015 from Aden port and ended on April 11, 2015. The Indian Navy evacuated 1783 Indian nationals and 1291 foreigners.

Operation Sukoon was launched during the 2006 Lebanon War to rescue Indian, Sri Lankan, Nepalese nationals and also Lebanese nationals with Indian partners. The Lebanon War was a military conflict between Israel and the Hezbollah when the Islamist political party launched a cross-border raid into Israel. The raid resulted in killing 10 Israeli soldiers. The bodies of two soldiers were taken away and were used to bargain for the release of Lebanese prisoners in Israel. This didn’t go well with Israel and as a result, they responded with an aerial and maritime blockade, bombing and ground invasion. One Indian citizen was killed during the war. The Government of India asked the Indian Armed Forces to evacuate Indian citizens from the war zone. Later, Sri Lanka and Nepal requested the Indian Government to help rescue their citizens as both the countries lacked military resources.

During the Kargil War, the Indian Navy stepped in by increasing the patrols around the coastline and by threatening to cut Pakistan’s sea trade. This brought forward Pakistan’s dependency on sea-based oil and trade flows. Later the operation was called off after the then Prime Minister of Pakistan Nawaz Sharif announced that the country is running out of fuel to fight a full-scale war.

Operation Python was a follow-up to Operation Trident and was a naval attack launched on Karachi by the Indian Navy during the Indo-Pakistan War. After Operation Trident was launched, Pakistan government beefed up the surveillance of its coast as the presence of Indian Navy vessels on the coast alerted them about the next attacks. As a result, the Pakistani warships tried playing safe by mingling with merchant’s vessels. Hence Operation Python was launched in December 1971, where a missile boat and two frigates attack the ships on the coast of Karachi. The operation concluded with no Indian casualty, while the Pakistani fleet tanker PNS Dacca suffered a huge damage.