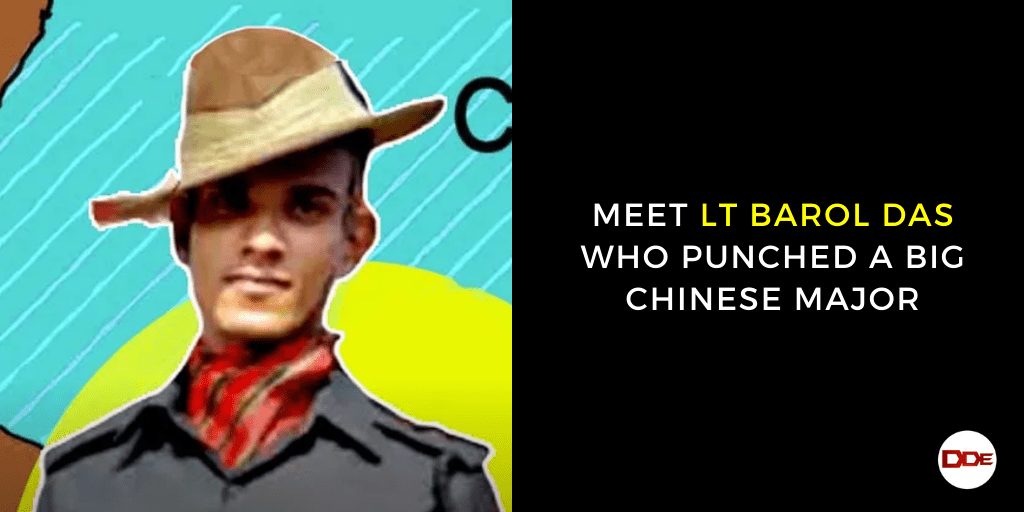 When a young Indian Army officer Lt Barol Das punched a Chinese PLA major on his nose, at Muguthang, and sent blood oozing from his nose, he nearly provoked an escalation that his officers had not bargained for.

The officer’s infantry unit had stopped the intruding Chinese PLA at Muguthang last week, and were furious at the Chinese commissar for shouting, “This (Sikkim) is not your land, this is not Indian territory… so just go back.”

Brought up in a military family – his grandfather a veteran of the Royal and then Indian Air Force and his father a colonel in the Indian Army – the officer could not stomach it anymore.

“What Sikkim not our territory? What the hell!” he shouted back. Then, as one PLA major moved menacingly towards his senior officer, a captain, the lieutenant flew into him and punched him in the face.

The Chinese major collapsed with a thud and his name tag came loose – a good souvenir to carry back – but the lieutenant left it alone, as his colleagues pulled him back.

After being admonished for a while by senior officers, for provoking a bigger spat, and being congratulated by officers from command and divisional headquarters at Kolkata and Sukna, the lieutenant was preparing for a commendation. But, the senior commanders could not land at Muguthang because of bad weather.

Even Army Chief Gen MM Naravane is said to have expressed his desire to ‘have a look at the boy.’

Meanwhile, the lieutenant is unrepentant, but somewhat crestfallen because he has been pulled back to a location away from the front. His only comfort that his troops are loving his act of ‘teaching the Chinese the right lesson.’

A senior officer said, “Birol is a hero for his troops – slight build but extremely pugnacious.”

The lieutenant’s grandfather, BB Das, served in the Royal and then Indian Air Force and retired as Master Warrant Officer. His father, Ashis, a graduate from St Xaviers college in Kolkata, joined the army in late 1970s and did his unit proud in ‘Ops Falcon’.

His sister, a legal graduate, is a law officer in the Indian Army as well, and is posted at Hyderabad. She had climbed the ‘Ashis Top ‘, standing at 14,000 feet, in 2018 and called her father from there.

The lieutenant, a technical graduate from Bengaluru, preferred the infantry and was commissioned in 2019. The family has been covered extensively by the media in West Bengal, where it is rare to find three generations in the army.