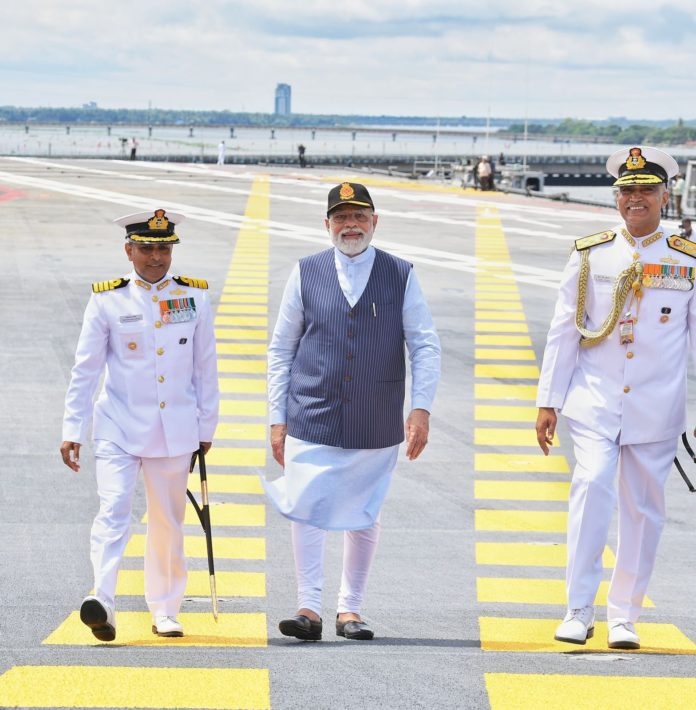 He said “today, India has joined those countries in the world, which manufacture such a huge aircraft carrier with indigenous technology. Today INS Vikrant has filled the country with a new confidence, and has created a new confidence in the country.”

The commissioning of INS Vikrant is a proud moment for the Nation as it showcased the ‘Aatmanirbhar’ credentials during ‘Azadi ka Amrit Mahotsav’ and a true testament to the country’s zeal and fervour in pursuing capability build up towards enhanced maritime security in the Indian Ocean Region. With the commissioning, India has entered into a select band of Nations having niche capability to indigenously design and build an Aircraft Carrier and real testimony to the Nation’s resolve for self-reliance and ‘Make in India’.

INS Vikrant is designed by Indian Navy’s in-house Warship Design Bureau (WDB) and built by Cochin Shipyard Limited, a Public Sector Shipyard under the Ministry of Ports, Shipping & Waterways, Vikrant has been built with state of the art automation features and is the largest ship ever built in maritime history of India.

The 262.5 m long and 61.6 m wide Vikrant displaces approx 43,000 T, having a maximum designed speed of 28 Knots with endurance of 7,500 Nautical Miles. The ship has around 2,200 compartments, designed for a crew of around 1,600 including women officers and sailors. The carrier is designed with a very high degree of automation for machinery operations, ship navigation and survivability. The carrier is equipped with the latest state of the art equipment and systems.

The ship is capable of operating air wing consisting of 30 aircraft comprising of MiG-29K fighter jets, Kamov-31, MH-60R multi-role helicopters, in addition to indigenously manufactured Advanced Light Helicopters (ALH) and Light Combat Aircraft (LCA) (Navy). Using a novel aircraft-operation mode known as Short Take Off But Arrested Recovery (STOBAR), INS Vikrant is equipped with a ski-jump for launching aircraft, and a set of ‘arrester wires’ for their recovery onboard.

With 76% indigenous content, construction of INS Vikrant has resulted in direct employment generation for over 2,000 employees of CSL. In addition, it has resulted in indirect employment generation for approx 12,500 employees for over 550 OEMs, sub-contractors, ancillary industries and over 100 MSMEs as well, thereby bolstering plough back effect on economy.