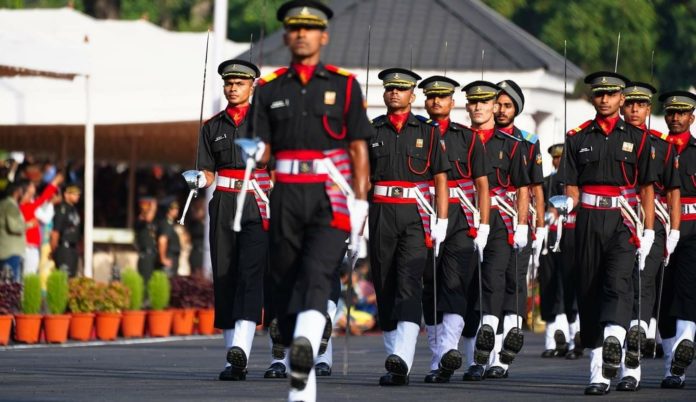 The Indian Military Academy passing out parade for 377 cadets including 89 from eight foreign countries was held on 11th June 2022. The parade was held against the backdrop of famous Chetwode Building on the IMA campus here in Dehradun, Uttarakhand.

GOC in Chief Lt Gen Amardeep Singh Bhindar, South Western Command, took the salute of the parade as reviewing officer and congratulated the cadets on successful completion of their training at Indian Military Academy.

The Band Symphony and Multi-Activity Display were also included in the events being exhibited during the passing out parade. Officers from 150 regular and 133 technical courses will be passing out with 89 cadets of eight friendly countries, who will also join the army of their respective countries.

The coveted Sword of Honour went to Academy Cadet Adjutant Mausam Vats, while Academy Under Officer Niraj Singh Papola got the Gold medal.

The silver medal in the Order of Merit was presented to ACA Mausam Vats.

The bronze medal for the gentlemen cadet standing third in the Order of Merit was presented to Ketan Patial.

The silver medal for the gentlemen cadet standing first in the order of merit from the technical graduate course was presented to Digaant Garg.

The Bangladesh Medal for the gentlemen cadet standing first in the order of merit from Foreign GCs was presented to Tenzin Namgay.

The Chief of Army Staff Banner was awarded to Sangro Coy for standing first overall amongst 16 companies for the Spring Term 2022.