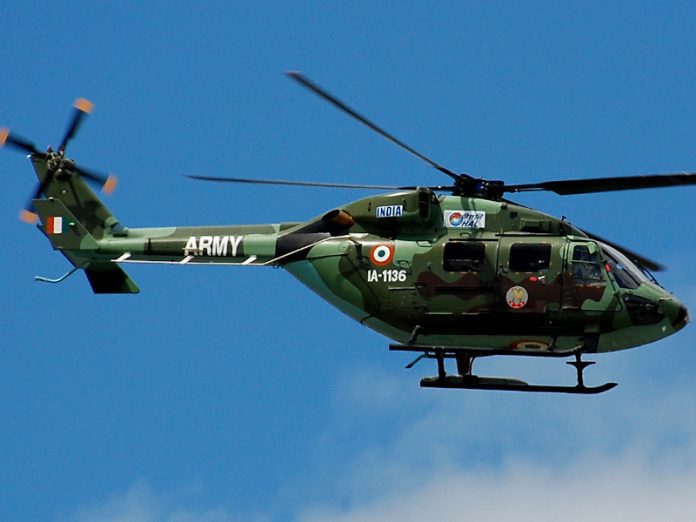 The wreckage of the army aviation helicopter that crashed into Ranjit Sagar dam in Jammu’s Kathua district with two pilots onboard nine days ago were finally located on Wednesday at a depth of nearly 80 meters.

The families of the two pilots, one of them a lieutenant colonel and the second a captain, have been camping at Mamun cantonment at Pathankot, from where the Rudra helicopter took off for a training sortie involving low-level flying over the lake before crashing into it around 10.43 am on August 3. The chopper was from the army’s Pathankot-based 254 ALH-WSI squadron, which earlier lost a Rudra chopper in January 2021.

The search and recovery operations had found some broken parts of the chopper and gear of the pilots including the helmets floating into the lake the same day but search for the wreckage and the pilots had not yielded any satisfactory result for the last nine days despite intense operations in 25km long, 8km wide and more than 500 feet deep dam.

The Indian Army is coordinating the efforts of Indian Navy deep divers team consisting of two officers, four JCOs and 24 other ranks, Indian Army Special Forces divers team consisting of two officers, one JCO and 24 other ranks, multi beam sonars, side scanners, remotely operated vehicles and underwater manipulators which have been flown in from Chandigarh, Delhi, Mumbai and Kochi and pressed into action at the crash site of the dam,” Defence spokesperson lieutenant colonel Devender Anand said on Tuesday, adding that search operations continued despite bad weather and rain.

Army, Navy, Air Force, national disaster response force (NDRF), state disaster response force (SDRF), NGOs, state police, dam authorities and private firms from all over the country were involved in the recovery operation which was challenging due to the near zero visibility below 50 meters owing to the colloidal nature of water in this season adversely impacting the accuracy of sonars and other sensors, the army spokesperson had said. However, the operation continued with experts, specialised equipment and divers flown in.

“No efforts are being spared for early conclusion of the search operation. A small area of 60m by 60m has been localized and special sonar equipment flown in from Kochi is being employed to enable the search operations to enter their final phase,” the defence spokesperson said on Tuesday.