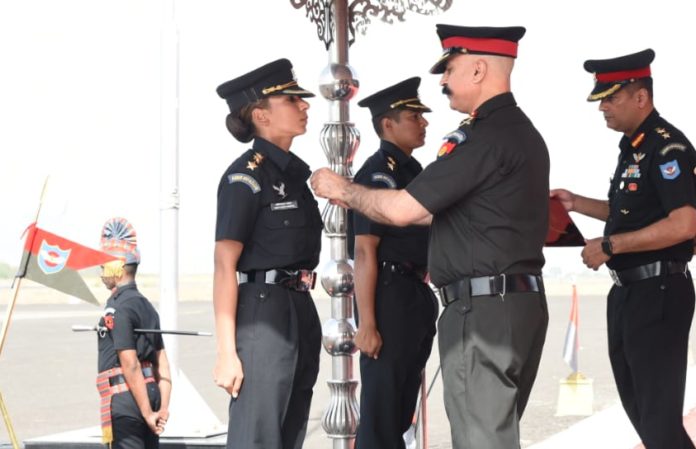 “While growing up in military Cantonments, and being surrounded by people in uniform, it always seemed like an ordinary affair. I never realised it (that it was different) until our family moved out of the military life, after my father’s retirement in 2011. The feeling only grew stronger after seeing my elder brother’s passing out parade at Indian Military Academy in 2013. That was the moment I knew what I wanted to do for the rest of my life,” Captain Barak said in an in-house interview shared recently by the Indian Army.

Captain Barak is an alumnus of The Lawrence School, Sanawar. She completed her graduation in B Tech in Electronics and Communication Engineering from Delhi Technological University in 2016 and was placed at Deloitte, USA.

In 2018, she was commissioned into the Indian Army from the Officers Training Academy, Chennai. During her attachment with Corps of Army Air Defence, she was selected as a Contingent Commander for Presentation of Colours to Army Air Defence by President Ram Nath Kovind.

She attained ‘A’ grading in Army Air Defence Young officers course, 75.70 per cent in Air Traffic Management and Air Laws course and passed the promotional exam, Part B, in her first attempt.

“After completing my training from Officers Training Academy, Chennai, in 2018, I opted for Army Aviation Corps. As I was filling the form, I knew I was eligible for only ground duty role but I ended up mentioning that I had qualified Pilot Aptitude Battery Test and computerised pilot selection system. Somewhere in my heart, I always knew that the day was not far away when Indian Army would start inducting women as combat pilots,” she said in the interview.

Recounting an episode with her father, who retired from the services in 2011, she said: “Not many people know this, but in 1987, during Operation Meghdoot, my father was leading a patrolling party from Amar Post to Bana Top Post (earlier Quaid Post). Owing to bad weather, he suffered from Cerebral Odema and was brought back to Amar Post, from where he was evacuated right in time. He owes his life to the Army Aviation Corps and hence, so do I.”

While women officers in the Indian Air Force and the Indian Navy have been flying helicopters for long, the army took a decision in early 2021 to allow them to opt for its aviation wing. Until now, women officers were assigned only ground duties in army aviation.

The development also comes at a time when the National Defence Academy is set to induct its first batch of women cadets in June 2022. In a landmark order in October 2021, the Supreme Court paved the way for women in the academy. They are now eligible for permanent commission too.