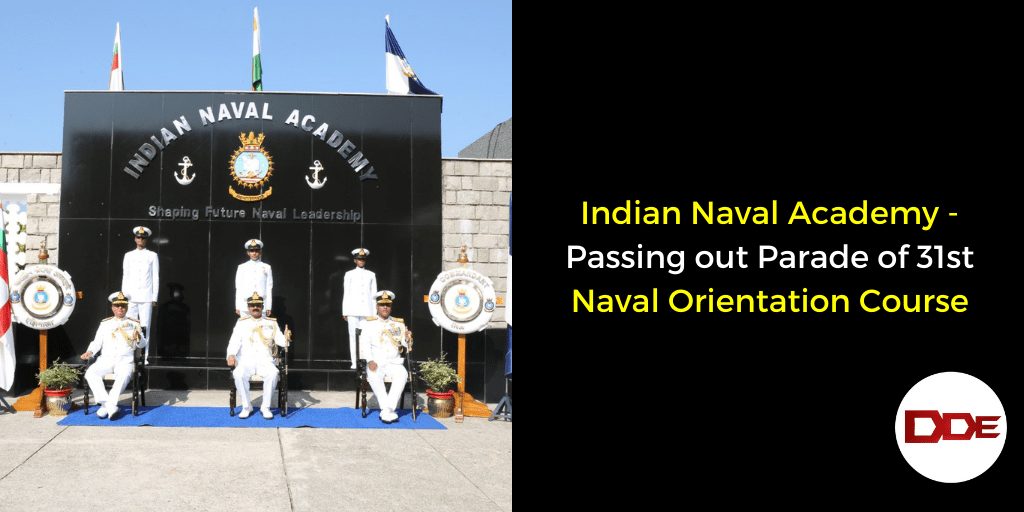 Passing out Parade of 31st Naval Orientation Course was held at Indian Naval Academy (INA), Ezhimala, on Tuesday, 26 January 2021, with 62 trainees including 15 women trainees passed out with flying colours, marking the culmination of their ab-initio training.

The successful trainees marched past the Academy’s Quarterdeck, in Slow March, to the traditional notes of ‘Auld Lang Syne’ – the poignant farewell tune played by Armed Forces around the world when bidding adieu to colleagues and comrades, for their ‘Antim Pag’ or final step at the Indian Naval Academy. Vice Admiral M A Hampiholi, AVSM, NM, Commandant, INA congratulated the cadets on parade for their impeccable turnout, smart drill and movements on parade. He emphasised upholding the ethos of Service before Self and reiterated the Core values of Duty, Honour, and Courage.

The Reviewing Officer and other dignitaries shipped the stripes of the passing out trainees and congratulated them for the successful completion of their rigorous training. These officers will proceed to various Naval ships and establishments to further consolidate their training in specialized fields. Stringent precautionary measures instituted by the Academy have helped in accomplishing the challenging goal of training the trainees despite COVID-19.

Also Read: How A Cadet Is Trained At Indian Naval Academy Ezhimala