This Is Why Marine Commandos [MARCOS] Deployed In Ladakh 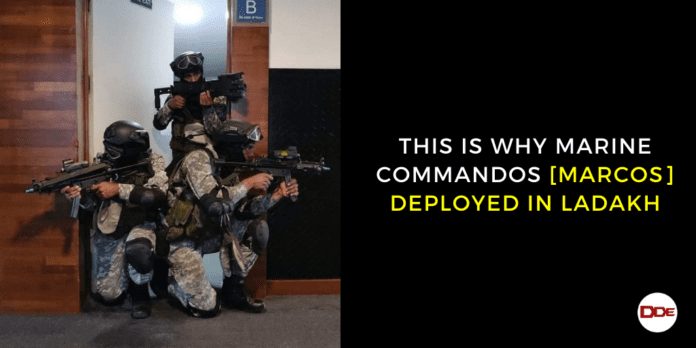 This Is Why Marine Commandos [MARCOS] Deployed In Ladakh

This Is Why Marine Commandos [MARCOS] Deployed In Ladakh. Amid the ongoing tensions between India and China, the government has deployed the Marine Commandos (MARCOS) of the Indian Navy in the Pangong lake area in eastern Ladakh

According to news agency ANI, government sources said that the idea behind the deployment of the MARCOS in Eastern Ladakh where Indian Air Force’s Garud operatives and Indian Army’s Para Special Forces, which have been there since day one of the conflicts, is to enhance the integration of the three services and provide the naval commandos exposure to extreme cold weather conditions

Indian Army’s Special Forces including the Para Special Forces and Cabinet Secretariat’s Special Frontier Force have been operating in Eastern Ladakh for carrying out special operations for a long time. The Indian Air Force’s Garud Special Forces moved to hilltops on the strategic heights on the Line of Actual Control (LAC) along with their Igla shoulder-fired air defence systems in the early days of the conflict to take care of any fighter or other aircraft of the enemy which may have tried to violate Indian air space. The special troops belonging to both the Army and Air Force have been there for more than six months now.

On August 29-30 also, the Indian side had used the special forces to occupy strategic heights along the LAC to preempt the Chinese from doing so. The Chinese have also maintained special troops on their side of the LAC.

MARCOS aka Marine Commandos – All You Need...