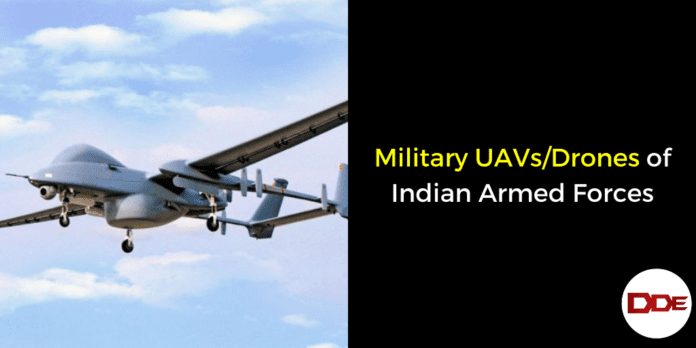 Unmanned Aerial Vehicle plays an important role in gathering the intelligence and Surveillance. Let us know the Military UAV/Drones of Indian Armed Forces.

The Netra Quadcopter is small and light weight UAV. It is developed by DRDO and Ideaforge. It is used for Surveillance and Reconnaissance missions. It is integrated with High Resolution CCD Thermal Camera.

The DRDO Lakshya is remotely piloted Unmanned Aerial Vehicle. It is developed by Aeronautical Development Establishment (ADE) of DRDO. This UAV is tasked for Surveillance and Reconnaissance. The Lakhsya is also used as target for live fire training for Active and Developmental Missile.

The Harpy is a Loitering Munition developed by IAI (Israel Aerospace Industries). These type of drones attack the enemy target area for some time with heavy warhead to suppress the Enemy Air Defence. These drones are also called as Suicide Drones.

The Unmanned Aerial Vehicles/Drones Under Development

The DRDO Nishant UAV is under development for serval years. It is developed by Aeronautical Development Establishment (ADE) of DRDO. This UAV is being developed for Surveillance, Reconnaissance, Intelligence gathering, Artillery Fire correction and training.

DRDO Ghatak is an Autonomous Unmanned Research Aircraft. It is being developed by DRDO and IIT, Kanpur. It is Armed Combat Aircraft. The Ghatak UAV will be equipped with Missiles and Munitions.

DRDO Rustom is a medium Altitude Long Endurance Unmanned Aerial Vehicle. The UAV is being developed for surveillance and Reconnaissance Operations. The DRDO recently conducted the test of advanced Variant  of Rustom 2 UAV from Aeronautical Test Range, Chitradugra. The Rustom 2 UAV is also Known as Tapas-BH-201. The range of Rustom 2 is 1000 Km with a Service Ceiling of 10,000 m.

DRDO Ulka is being developed by Aeronautical Development Establishment (ADE) of DRDO. It is tasked to act as Aircraft with approaching and Receding Characteristics. It will be used for defensive training of Missile Crews.

Also Read : Military Satellites Of India – All You Need To Know