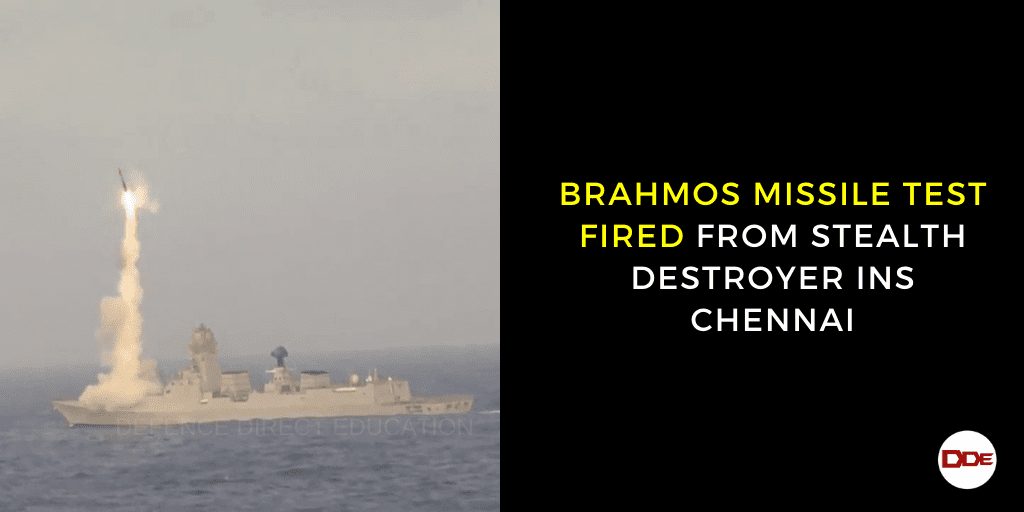 India successfully tested the Naval Version of Brahmos Missile from INS Chennai. The test fire was conducted in the Arabian Sea. Brahmos is supersonic Cruise missile developed by DRDO along the Russian Counterparts.

The Missile is now capable to be fired from all the four dimensions. Already, the Missile is operationalized with the Indian Army, Navy and Air Force. The Missiles are also deployed at LAC and other regions due to ongoing tensions with China.

The Missile is being integrated in most of the vessels of Indian Navy. The Modern Frigates and Destroyers are loaded with Brahmos missiles. Along the Barak 8 missiles, the Brahmos will give cutting edge advantage to the Indian Navy.

The Indian Air Force has already stationed the Sukhoi 30 MKI squadron with Brahmos at the Thanjavur AFS. The 222 squadron Tiger Sharks looks at the maritime peace in the IOR (Indian Ocean Region).

The Brahmos name is derived from the Indian River Brahmaputra and Russian River Moskva . The Missile is developed by Brahmos Aerospace, the joint venture of India and Russia. India is now focusing on the export version of the Brahmos missile. The discussions are ongoing with countries like Indonesia and Vietnam.

India became the part of MTCR – Missile Technology Control Regime in 2016, which allows the DRDO to increase the range of Brahmos missile. Initially, the range of Missile was 260-290 Kms. The DRDO has recently test fired the extended range Brahmos ER having the range of 450+ Kms.